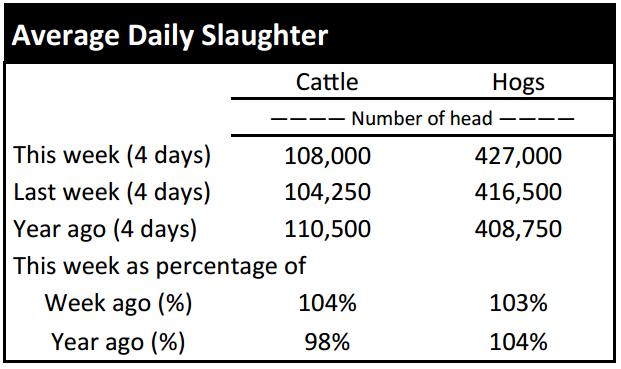 Packers were not able to maintain the momentum this week as beef cutout prices found little room to press forward compared to the previous few weeks. Even though they did not gain additional traction this week, they did not falter either.

Packers are continuing to manage harvest rates and artificially creating a short supply of beef which has allowed them to artificially support the cutout price. Packers will continue managing harvest rates to support cutout prices as the USDA’s All Fresh retail beef price averaged $6 per pound for the first time.

Positive news was reported last week by the National Restaurant Association in their monthly Restaurant Performance Index (RPI). The index tracks the health of and outlook for the U.S. restaurant industry. The January index was 102.7 and marks the 23rd consecutive month the index exceeded 100 which is representative of expansion in the index of industry indicators. Expansion in the restaurant business is a good sign for beef and other meat industry markets as consumers continue to spend disposable income on food away from home.

TENNESSEE AUCTIONS: Limited receipts from one week ago inhibit the establishment of trends. However, on Tennessee auctions this week compared to three weeks ago steers and bulls under 550 pounds were $11 to $16 higher while steers and bulls over 550 pounds were $5 to $6 higher. Heifers were $2 to $8 higher. Slaughter cows were $3 to $4 higher while slaughter bulls were steady to $2 higher. Average receipts per sale were 616 head on 8 sales compared to 257 head on 2 sales last week and 0 head on 0 sales last year. 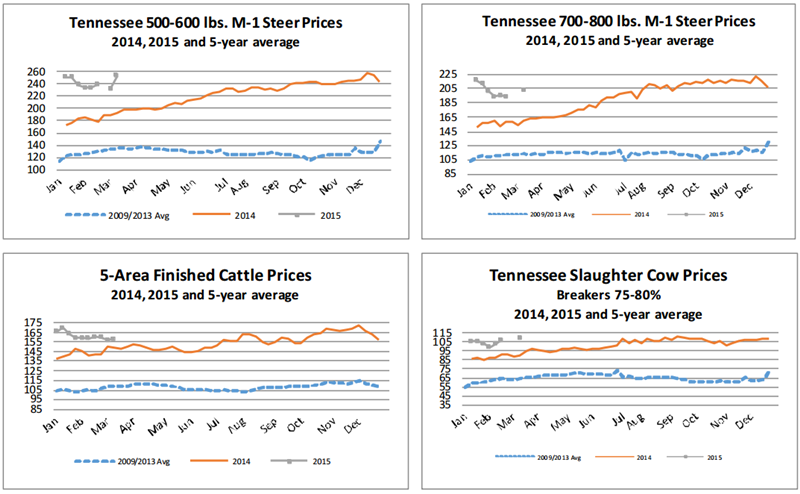 OUTLOOK: The winter weather held off long enough this week for a few markets to host sales, but mid-week rain and wintery precipitation resulted in many producers leaving calves standing in the field. It may not be a bad situation for many cow-calf producers as lightweight calf prices have caught fire in the past month as they normally do in the early spring.

What few calves were secured this week came at sharply higher prices than those witnessed in January and February. As has been discussed previously, stocker producers may want to consider purchasing a heavier weight class of calves than in past years.

These price slides may continue to widen the next couple of weeks as stocker producers work to secure inventory. As the market moves into late spring and summer, the price slide will narrow again with most of the narrowing occurring due to declines in the price of lightweight calves. Thus, expected stability in the feeder cattle market may support the idea of purchasing heavier calves for some producers. It may also be wise to use price risk management on spring purchases as the market volatility is high.