In The Cattle Markets: Choice/Select Spread Trends and Impacts on Fed Cattle Prices

The spread is determined by both demand and supply factors.  As cattle hit their typical grading peak in the first quarter of the year and when demand for middle-meats is seasonally low, the weakest Choice/Select spread occurs. Going into spring and summer the demand for middle-meats is strong as people begin grilling more; during this same time the percentage of cattle grading choice typically declines, and as such the Choice/Select spread will typically increase between now and July.  In July, the Choice/Select spread will narrow until October and then increase through the end of the year.

Differences in the Choice/Select spread are also driven by value differences in the seven primal values, especially the loin and rib. The value of the other five primal cuts is important to the overall cut-out value, and strength in demand for these primals does have an impact on the Choice/Select spread and can result in higher fed cattle prices.  The small differences between choice and select values for these primal cuts is often due to export demand.  For example, primal cuts such as brisket, chuck and round are popular in the United States but are in higher demand in countries such as Canada, Mexico and South Korea.  Mexico and South Korea have historically preferred select quality cuts over choice, whereas Japan prefers choice quality.

U.S. beef exports have accounted for approximately 9-11% of domestic U.S. production in recent years, providing a significant boost to fed cattle prices.  2015 saw a 12% decline in beef exports.  The U.S. exported 19% less beef to Japan in 2015 as compared to 2014, and 17% less beef to Mexico; however exports to South Korea increased by 6%.  This change in beef exports has impacted the value for the different primal cuts and has contributed to the smaller difference in value between choice and select loins, and increased difference in value between choice and select rounds. As export demand increases in 2016, the price of the specific subprimal cuts will increase and ultimately affect the cut-out value and fed cattle prices.

Live cattle traded $2-$4 higher in Nebraska and Iowa.  Live cattle futures ended the week up.  Strong prices were tied to short-coverings and technical buying brought on by a weaker dollar.  Feeder cattle futures increased despite higher corn prices and weaker cash feeder trade.  Choice beef prices increased by $3.08, improving packer margins.  Choice beef prices were at the minimum price for 2016 on February 19 and have gained 5.9% since then.  This increase has improved packer margins. 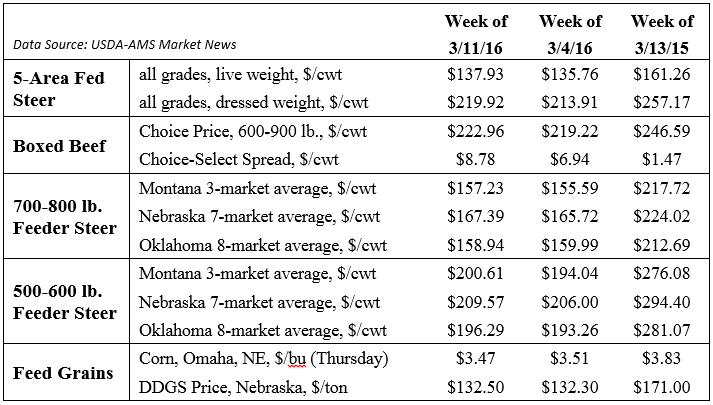