Young Producers Pave Their Way in the Beef Industry

Young producers are a rare sight in pastures and farm fields across America. Breaking into the cattle business is difficult. It requires a number of assets including land to graze and grow feed, equipment and genetics. USDA’s Census of Agriculture estimates there are 2,109,363 farmers and ranchers, but fewer than 120,000 are under the age of 34. The average age of American’s involved in farming and ranching is 58.3 years old, and the trend has been on the rise since the 1980s. 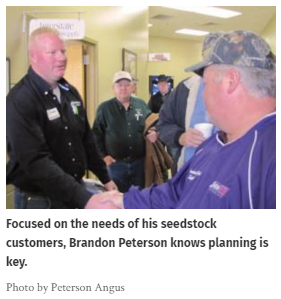 As a freshman South Dakota State University football walk-on, Brandon Peterson took a knee with his teammates during two-a-days to listen to an inspiring speech from his coach. That speech sparked the Alcester, S.D., rancher’s big dream of owning 500 cows. The next spring he purchased five Angus heifers—the foundation for Peterson Angus.

When Peterson graduated in 1999, he had 10 heifers and an eye on returning to his family’s diversified livestock operation. With 150 ewes, 100 commercial cows and a small hog farrowing operation, there wasn’t enough income to support multiple families, so Peterson began a career as a cattle nutritionist.

“The cool thing is I had a passion for genetics, I was growing my herd and I got to see how nutrition played into genetics on a day-to-day basis,” Peterson says.

He met a mentor during that time who allowed him to sell four bulls on the end of the Thousand Oaks Angus sale in 2005. The next year, Peterson cosigned eight bulls to the sale. Unfortunately, it was the last sale because the Thousand Oaks herd was sold for dispersal.

Peterson then partnered with a local producer to co-host their own production sale in 2007. There were 36 bulls offered and 24 replacement heifers. The auction barn seated 400, but only 60 people attended.

“Needless to say, the first sale was a bit of a struggle,” Peterson says. Only seven bulls and 10 heifers were sold.

Peterson started to question whether he had made the right choice to be in the business, but reflected back to the goal he set at football practice. At 40 cows he wasn’t in much debt and prices from 2008 to 2009 offered the opportunity to expand.

When the cow herd reached 200 head in 2013, Peterson retired from his day job as a nutritionist and now works full-time on his seedstock operation.

Today, Peterson is well on his way to his dream. He owns 300 cows, and is planning to add the final 200 head in the future. Approximately 500 embryos were placed in recipient cows at cooperative herds he works with. This past year, two of Peterson’s bulls were among the top of the Angus breed for registrations.

He suggests young producers define their program by writing a business plan. “Keep the big picture in mind,” he adds. 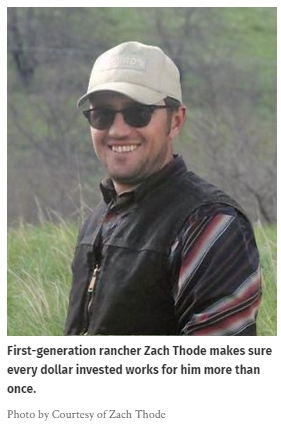 Coming from a “family of hippies,” Zach Thode lived in a tent with no running water or electricity until he was 6 years old. His parents raised him in the foothills of Colorado’s Rocky Mountains where he was surrounded by ranches.

“Growing up, I saw these guys ranching around me and I loved what they were doing,” Thode says.

At 8-years-old he regularly hopped off the bus after school and began helping local ranchers to learn about agriculture. That passion led Thode to attend Colorado State University, graduating in 2005 with a degree in agricultural engineering.

He worked at several engineering jobs before settling in Livermore, Colo., where he runs 500 commercial cows and is an engineer for an irrigation company.

For Thode, ranching has been about utilizing opportunities and making them work.

“There is a possibility with every single decision that comes in our life and we have to figure out how to make that possibility work for us,” Thode says.

For example, he trades out hunting or fishing at his ranch for a day’s work, and buys used equipment that can be repaired. “As a young producer we have to leave pride at the door,” Thode says. It shouldn’t be about having the fastest horse or newest pickup, because those things don’t pay you back.

Thode also works as an auction representative with Big Iron and he’s found several opportunities to make purchases worth the money. “We have to make that dollar work for us more than once,” Thode says.

Being aware of cost benefits, Thode raises his own bulls with a small herd of AI’d purebred cows. The cost of a straw of semen is a lot better return on investment compared to buying a bull at auction, he says.

Thode leans on relationships he’s built with fellow producers and neighbors. “To do that you have to be honorable in everything you do,” Thode says. “Our reputation is all we have at the end of the day. We have to keep that where we want it.”

Following in Their Footsteps 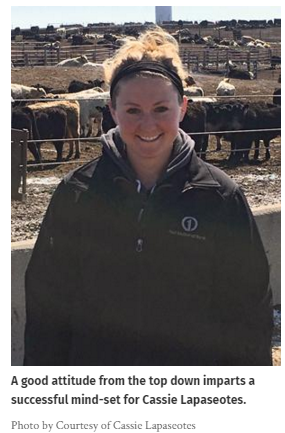 Riding feedlot pens in the saddle with her mother, 5-year-old Cassie Lapaseotes caught the cattle feeding bug. Even during college, she came back on summer breaks to help at the family feedlot. One day, she dreamed of returning to manage the operation.

“My dad is very forward thinking. He is probably a step ahead of a lot of people—knowing he needs to change to bring us back in,” she says.

Several events fast-forwarded her arrival to the family business. When her grandfather was diagnosed with lung cancer, succession planning occurred weekly for six months.

Succession planning “is a tough topic to deal with,” she says. “You have to have the conversation.”

Days before she graduated from Colorado State University, her father’s feedlot manager quit—creating an opening for her to step into.

Before taking the reins, she worked every job in the feedlot from scrubbing tanks to making feed calls. “I worked my way to the top,” she says, adding her father wouldn’t “send a duck to eagle school.”

Now, she manages Lapaseotes Feed Yard near Bridgeport, Neb., overseeing six employees: four in the feedlot and two with the cowherd.

“When I come to work every morning, my attitude and my demeanor reflects on everybody I work with,” she says. It can be a heavy weight on her shoulders, but a positive attitude is crucial to a successful business.

Before bulls are turned out this spring a complete breeding soundness evaluation (BSE) should be conducted by a veterinarian, including a physical examination, reproductive tract examination, and semen evaluation.

Heifers conceiving early in their first breeding season will have increased lifetime production and efficiency. It is critical heifers attain enough weight to initiate their first estrous before the onset of breeding.

Study says this tax increase, whether via tax at death or carryover of basis, will have negative impacts on family-owned businesses, US gross domestic product, and job creation both in the immediate and long term.

Wendy's will focus on responsible sourcing, sustainable packaging, greenhouse gas reduction and increasing diversity within its leadership, management, and franchisees.

Global commodity prices are expected to stay firm around current levels in 2021 after recovering in the first quarter buoyed by strong economic growth, the World Bank said on Tuesday.