The long, cold winter is not completely finished with our alfalfa stands.
By: Kim Cassida, Michigan State University Extension

After the long frigid winter followed by cold wet spring, there is much concern about potential winterkill in alfalfa stands. After a slow start to the growing season, we are now seeing the extent of alfalfa winterkill. Damage is spotty across the southern part of the state, with many stands that looked questionable a few weeks ago now growing out of the problem because they have had time to form new buds to replace those damaged by cold. The Thumb region of Michigan is most affected, with many fields showing 30-80 percent loss and little recovery. Damage in northern Michigan and the U.P. is less widespread than in Central and Southern Michigan. Remember that alfalfa varieties with low fall dormancy (FD) ratings are later to break dormancy in spring than varieties with higher FD ratings and will therefore lag behind in development.

Where damage has occurred, it is concentrated in areas of fields where ice sheets formed, water ponded or channeled, where soil was continuously saturated for a long period of time during snow melt, or in wind-scoured areas where there was not enough snow cover to insulate alfalfa against extreme temperatures. Intensively and late-harvested stands that are three or more years old are showing more damage than younger stands under moderate management, indicating that accumulated stress is a factor in losses. Because plants damaged by winter cold or spring waterlogging are more likely to die during subsequent stresses like heat and drought, the full effect of the cold winter may not be evident until several cuttings are harvested.

What to do?
Damaged stands present producers with multiple decisions. Should they keep a damaged field despite reduced production potential, try to boost the production of forage from that field by supplemental seeding, rotate to a different crop or plant a new alfalfa field? The latter choice also requires attention to securing an emergency short-term forage crop to cover forage needs during the year it takes for the new alfalfa stand to reach full production potential.

All alfalfa stands naturally thin over time, but yield can still be maintained because surviving plants become bigger. Therefore, stands can tolerate some loss if enough healthy crowns remain. The number of crowns is very difficult to estimate accurately without digging plants, but fortunately the number of alfalfa stems per square foot is an even better indicator of stand vigor than the number of plants. Stem counts are easy to measure. Simply wait until new growth is 6 or more inches tall and count all stems longer than 2 inches within a one square foot area. Healthy stands contain more than 55 stems per square foot, regardless of stand age. Once stem count drops below 40 stems per square foot, it is time to seriously consider intervention. 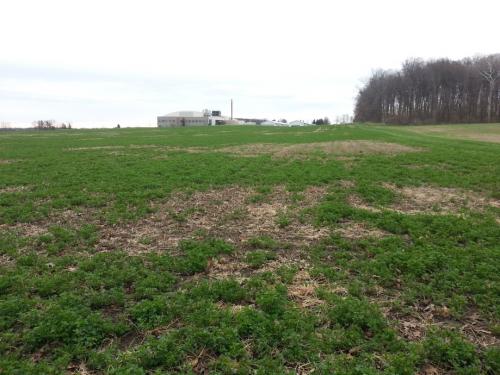 Damage in this stand is patchy and concentrated in areas where water channeled across the field from surrounding higher ground. Photo credit: Kim Cassida. MSU Extension.

Can I inter-seed to thicken the stand with more alfalfa?
No. Michigan State University Extension does not recommend this practice because interseeding more alfalfa to thicken a uniformly thin stand will often fail. If surviving alfalfa plants are less than 18 inches apart or the pre-existing alfalfa plants in the gaps reached physiological maturity (capable of flowering) before dying, autotoxic compounds from the alfalfa itself may prevent establishment of new alfalfa seedlings for up to a year. This would apply to stands planted in the spring of 2013 that had one or more cuttings last year. Autotoxic compounds can also permanently damage the root systems of seedlings that manage to survive, reducing the total yield potential and lifespan of plants. Competition from surviving plants in the original stand further reduces the success of overseeding with alfalfa. Although there is conflicting data on autotoxicity and how it can be mitigated by management, most agronomists recommend waiting one year before reseeding a field back to alfalfa.

Can I inter-seed to thicken the stand with other non-alfalfa forage species?
Yes. Fortunately, inter-seeding with other forage species is not affected by alfalfa autotoxicity. Inter-seeded forage grasses or clovers will fill in the gaps left by winterkilled alfalfa, preventing weed invasion while producing nutritious forage. When a pure legume stand is desired, overseeding with red clover (6-10 pounds per acre) can prolong the useful life of a damaged alfalfa stand by up to two years. Red clover is a good option for producers that harvest their forage primarily as chopped haylage. Many grasses are suitable for overseeding into damaged or thin alfalfa. Small grains and annual cool-season grasses (oats, wheat, rye, or triticale at 50-75 pounds per acre, annual or Italian ryegrass at pounds per acre,) can provide high quality forage quickly and effectively prolong stand life for one year. If using annual or Italian ryegrasses, use care to prevent seed set because these grasses readily develop glyphosate resistance and can potentially become weed problems when a field is subsequently rotated to corn or wheat. Interseeded perennial grasses like orchardgrass (5-10 pounds per acre), timothy (3-5 pounds per acre), or tall fescue (4 pounds per acre) take longer to establish than annual grasses, but can enhance stands for two or more years.

For best success, large dead patches should be planted with a no-till drill or disked first and then seeded. Broadcast over-seeding is unlikely to give satisfactory results unless it can be done early as a frostseeding. At this point in May, we are far past the date of effective frostseeding. Thin alfalfa stands can be over-seeded using a no-till drill if spring alfalfa growth is still small. Once surviving alfalfa has reached 6-8 inches in height, it will be extremely competitive with grass seedlings and it will be more effective to drill in grass after first cut is harvested.

Replacing alfalfa stands
If the damaged alfalfa field was seeded more than one year ago (spring 2013 or earlier), it is best to plant a different crop for a growing season before planting alfalfa again to avoid autotoxicity problems. A rotation to corn grain or silage, small grains, or forage grasses will make good use of the nitrogen left behind by the alfalfa while maintaining a supply of forage. Depending on the crop to be planted, it may be practical to harvest first cutting of the damaged alfalfa stand before renovating to a new forage crop. Corn silage can be planted as late as July 1 and has high potential total season dry matter and energy yield. Small grains are a good option for hay or silage when harvested at boot stage, oats with peas make excellent silage when harvested at heading, and annual and Italian ryegrass make high quality silage or baleage. Ryegrasses are not a good choice for dry hay baling because they are difficult to dry. Warm-season annual forage crops like teff, pearl or foxtail millet, sorghum, sudangrass or sorghum-sudangrass establish readily in summer and can provide good quality hay, silage, baleage or pasture.

Meanwhile, establish a new alfalfa field elsewhere if possible so it will be ready to begin full production in 2015. Make sure to select a field that has not had alfalfa for at least one year, check that herbicides used in the previous crop rotation do not have residual problems for seeding alfalfa, and that soil pH is above 6.5. Planting a small grain (