For 25 years, Ryan Veldhuizen and his father have been experimenting with alternative
crops at what he calls “our version of the modern family farm” near Edgerton,
Minnesota.

Veldhuizen says their rationale for seeking alternatives is simple: “Disease pressures in
beans are mounting. If we are going to be serious about sustainability, we are going to
have to talk about a multicrop rotation.”

The goal of this search has been straightforward—to add biodiversity that fits the busy
schedule of a 2,500 acre farm which produces 30,000 hogs annually. To be viable, any
new crop had to fit that framework and prove to be both sustainable and scalable.

Although the goal is quite simple in theory, early results were not particularly promising.

The Veldhuizens first planted malted barley, followed by spring wheat, grain sorghum
and yellow peas. None fit the bill. Although the reasons varied, each crop carried
limitations causing it to be impractical or misaligned with the operation. “Have you ever
hauled manure in late fall?” Veldhuizen quips.

In 2017, a chance discussion with a University of Minnesota researcher revealed a new
option to consider— hybrid rye. Veldhuizen admits he was initially a skeptic.

“Rye has always been something of a shadow-banned crop. This is because wild-sown
varieties can be prone to ergot, which is simply not acceptable. The first mention of rye
immediately brought those memories to mind. I’m like a lot of farmers—my fastest gear
is reverse.”

And yet the researcher made a strong case that advancements have fundamentally
changed rye from a wild cover crop to a true hybrid—more than doubling yield while
also addressing ergot concerns. Perhaps most compelling for Veldhuizen, rye planted in
September fit nicely into his farm calendar and offered a potential feed source for
livestock.

While he was still unconvinced, he recalls thinking “it felt like a risk worth taking.”
So in 2017, Veldhuizen planted a few hundred acres of hybrid rye. He reasoned that the
growing season fit a slower time on the farm and the new crop offered a use for summer
manure from his hog operation. 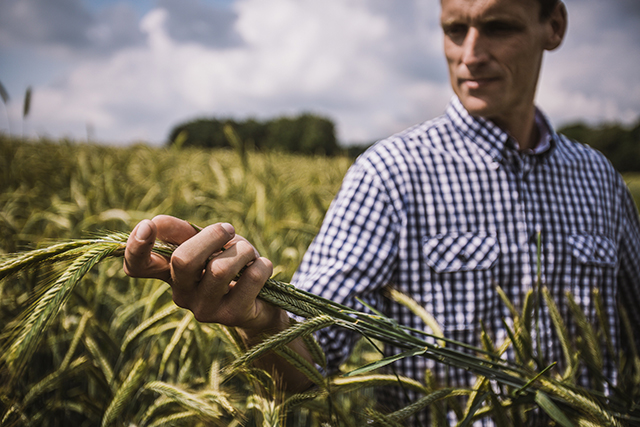 He had low expectations, so he was surprised by the upside, a net yield of 130 bushels an acre that first year. More impressive than that, he says, the new crop was low maintenance and provided a viable feed option for his hog operation.

“Marketing is the Achilles heel of every specialty crop, [but] with rye, this isn’t an issue. I walk it off my yard, it gets ground and fed. Even better, it offers a spot for manure during a time of year when it’s a lot easier to haul.”

Veldhuizen added 20% rye to his feed mix of corn and soy and says the results were immediately noticeable.

“Just like you don’t like eating the same thing every day, hogs appreciate variety. Rye delivers that, and I can visually see gains in consumption.”

While these results are anecdotal in nature, for their part, academics are working to catch up to innovative farmers like Veldhuizen. While many studies exist that support the increased yields he experienced, researchers only recently began tackling rye’s potential as a livestock feed. It’s work that’s being led by South Dakota State University (SDSU).

Warren Rusche is a beef feedlot management associate at SDSU who recently completed a study looking at rye’s application as cattle feed. His conclusion: “In a crop and livestock system, rye looks strong—it’s the future.” 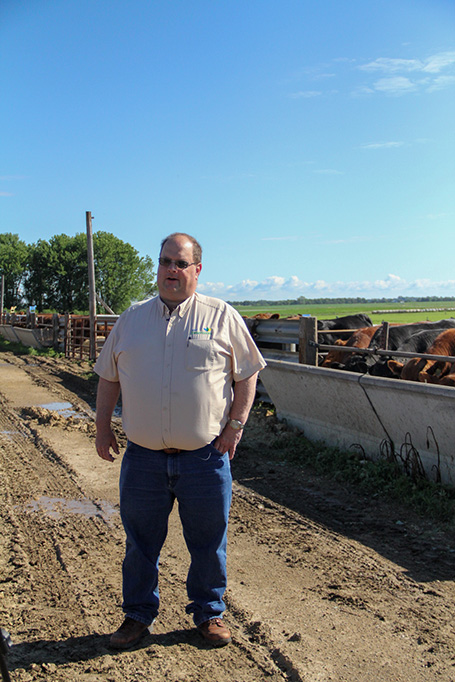 Rusche bases this conclusion on a 2019 study he conducted at the Southeast research farm in Beresford, South Dakota. Using a control group, the study looked at 240 steers on a diet of dry corn, silage and distillers. Researchers substituted rye for a portion of the diet with a subset of steers and obtained impressive results.

“At one-third hybrid rye feed, the performance was statistically the same as with the control. We are comfortable that this type of approach would work,” says Rusche.

Additional studies are underway to assess rye as feed for hogs and also to enhance knowledge on the agronomy side of the equation. Overall, the results are promising.

The studies combine to make a strong case for growers seeking to break a two-crop corn/soybean rotation in the plains of Minnesota, Iowa, Wisconsin and the Dakotas.

“The gain in moving toward sustainable agriculture is significant. This crop has strong potential to be another step forward,” says Rusche. “Rye is robust, it’s not vulnerable to winter kill or diseases, it’s more competitive with weeds, it’s not difficult to raise and it has good yield potential.”

The SDSU research is compelling and continues to drive behavior, but as is often the case, farmers appear to be front-running researchers. Mac Ehrhardt, president of Albert Lea Seed in Albert Lea, Minnesota, says he’s seen a significant uptick in sales of hybrid rye seed in recent years—both to be grown for feed and as a cash crop. 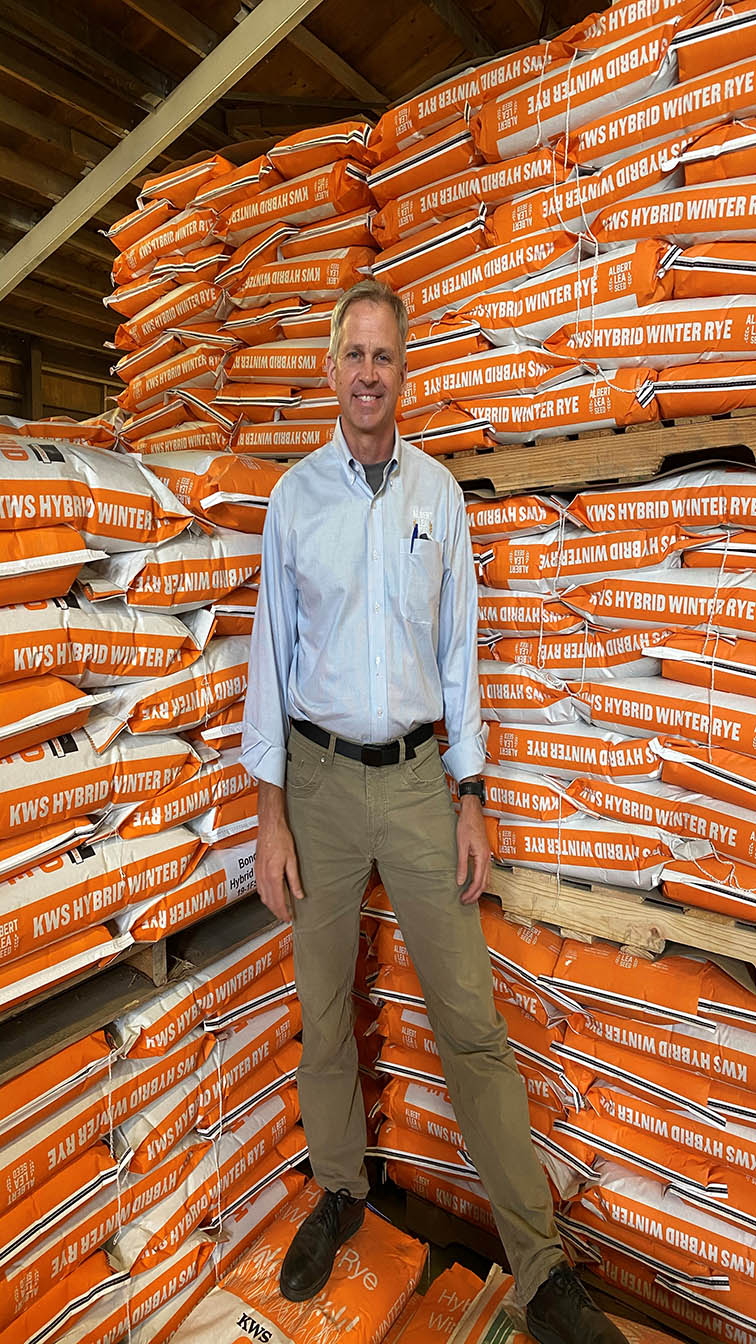 “Rye contracts are available, and a lot of farmers are taking advantage of the milling and distilling markets too—so much so that some of our farmers say it is their most lucrative acre.”

Becca Brattain is a feeding nutritionist at KWS, the United States’ largest producer of hybrid rye seed. She says what Ehrhardt’s clients are seeing is by design—noting that the hybrid process has been particularly valuable for rye. 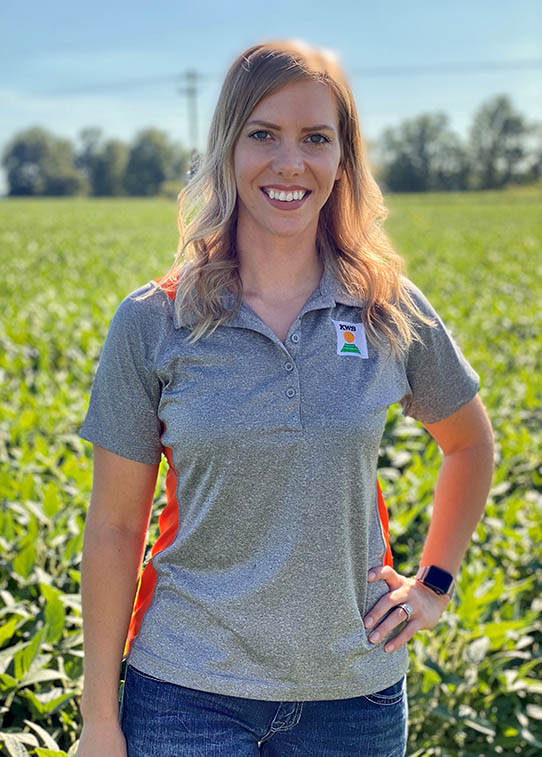 “This is not your grandad’s rye. Our hybrids were created from varieties with substantially more pollen. Combined with flowering time that is uniform and short, the twofold impact is a disease-resistant plant with incredible upgrades to yield.”

Ehrhardt says he’s seen the results hybrids bring and that feedback about rye in Albert Lea has been overwhelmingly positive. He notes that growers are finding it to be a lowmaintenance and inexpensive crop delivering yields north of 100 bushels an acre.

In terms of rotation, Ehrhardt says most growers in his area pair rye with early soybeans or corn cut for silage.

“It’s a strong third crop in your rotation, breaking weed, disease and pest cycles and offering an especially good return if you have a straw market.”

Back in Edgerton, now three years into his journey with rye, a once-hesitant Veldhuizen has transformed from skeptic to advocate. He says that as long as growers treat rye like the hybrid crop that it is through careful planting, it can be incredibly simple to grow.

This simplicity combines with crop timing and its application as livestock feed to make rye a win in terms of scalability. On the sustainability front, Veldhuizen estimates a 10% uptick in production for corn and soybeans as his three-crop rotation reduces weed pressure and improves soil health.

“By coupling with early beans, we are optimistic about the future with this crop. We’re so optimistic we’re doubling our acres of rye to over 700 this year.”

For now, it’s enough to place his long-running search for alternatives on hold, as he’s optimistic a 25-year search may have finally uncovered a winner.

Even so, he notes with a smile that for the coming year, he still might find room for a few acres of yellow peas.

How can livestock production be a part of the solution? Temple Grandin and Frank Mitloehner discussed strides in sustainability and the future at the Online Top Producer Summit and Trust in Food Symposium.

National Cattlemen’s Beef Association spokesmen gave an update on the state of the industry and priority issues in Washington, D.C. that may affect cattlemen during the group’s virtual Winter Reboot conference.