Hormones in Beef: Myth vs. Fact

These "chemical messengers" are substances produced in the body that travel through the bloodstream to regulate body functions such as reproduction, metabolism and growth.

Hormones such as estrogens or androgens are often administered to growing cattle intended for slaughter to promote growth by complementing the effects of naturally occurring hormones.

These growth-promoting hormones are generally administered to cattle in the form of small pellets termed 'implants', placed under the skin in the animal's ear.

The boost in growth rate created by hormone implants allows for cattle to be finished earlier, thereby requiring less time on feed and fewer resources per pound of meat produced.

Are these hormones safe?
A common myth surrounding beef produced with additional hormones is that it is unsafe to consume. The fact is that the U.S. Food and Drug Administration regulates the development and use of hormone implants and the Food Safety Inspection Service of the USDA routinely monitors residues of synthetic hormones in meat.

It is true that beef from hormone-implanted cattle has increased estrogenic activity compared with non-implanted animals.  This fact alone may alarm beef consumers; but it must be put into the context of actual amounts consumed and the levels found in other products.

However, this amount is a fraction of what is found in many other common foods.

Hormone-free doesn't exist
It is also important to understand that there is no such thing as "hormone-free" beef.  As stated above, hormones are naturally occurring. If they were eliminated completely from the body, the animal could not survive.  Therefore, any amount of beef, or any animal product for that matter, will have some level of naturally occurring hormone present.

There are products available from beef that have not been administered additional hormones.

Beef marketed under the label of "naturally raised" must be raised in accordance with the supporting USDA voluntary claim standards. These cattle must be grown without growth-promoting hormones, fed no animal byproducts or antibiotics.

Also, beef labeled "organic" is not administered implants and must adhere to the USDA guidelines for organic beef production.

As implants reduce the cost of production consumers should expect to pay a premium for products carrying those labels.

To learn more about hormones in beef production and other common myths in the meat industry visit the Meat Myth Crushers website. 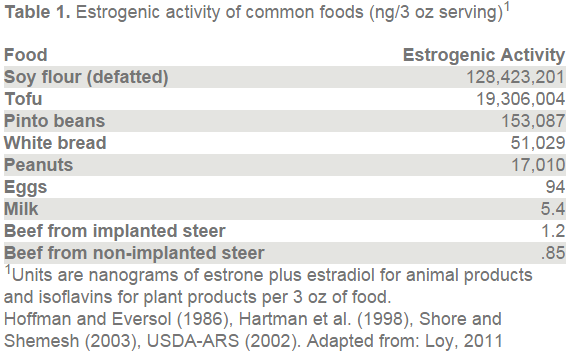