Do Your Heifers Make the Grade?

From health to nutrition to reproductive status, how you manage and monitor replacement heifers now can have a positive outcome on the future success of those females.

Pre-breeding vaccinations, administered at least 30 days prior to breeding, are the first step in setting up heifers for their future role in the cow herd. By immunizing the females against infectious reproductive diseases, you can help minimize embryonic losses later in gestation.

Research from South Dakota State University (SDSU) has demonstrated that developing heifers to between 55% and 65% of their mature body weight before breeding can increase pregnancy success because then more heifers reach puberty and cycle prior to the breeding season. Monitoring weights can help determine the rate of gain needed for the heifers to reach their target weight by breeding time.

A management plan that includes reproductive tract scoring (RTS) further adds to the potential success of replacement heifers. RTS and pelvic measurements, taken four to six weeks prior to breeding to assess puberty, aids in identifying those heifers that are more fertile and will conceive earlier in the first breeding season.

First, replacement heifers should be given pre-breeding vaccinations at least 30 days prior to breeding to protect them from infectious reproductive diseases, such as leptospirosis, IBR, and BVDV. These conditions can be detrimental to fertility as they contribute to embryonic losses in addition to losses later in gestation. Heifers may need booster doses of these vaccines, so timing should be carefully considered and discussed with a veterinarian. Brucellosis, or “Bangs,” vaccination should also be considered. This vaccine is administered by an accredited veterinarian when the heifer is between 4 and 12 months of age. There is no longer a national or state requirement for brucellosis vaccination, but vaccinated animals are better able to move between states (as a result of the orange identification “Bangs tag” applied at the time of vaccination) and are protected against the disease should it show up in the region.

Heifers must reach puberty by 15 months-of-age if they are to calve by 24 months. Therefore, heifers that reach puberty at an earlier age than their counterparts prior to breeding (due to nutrition, genetics, environment, etc.) are more likely to experience multiple estrous cycles before the breeding season. This can have a positive effect on conception, leading to earlier calving during her first year and also in consecutive years, allowing her to wean more pounds over her lifetime. However, it can be difficult to determine the exact age at puberty without watching them constantly for visual signs of estrus. Reproductive tract scoring (RTS) and pelvic measurements can be assessed 4 – 6 weeks prior to breeding replacement heifers to see if they are reaching puberty and if they should actually be bred or if value can be realized by feeding them in the feedlot.

RTS is a subjective measurement that involves palpation of uterine tone, uterine size and ovarian structures of the reproductive tract to determine sexual maturity of the heifer. A scoring system 1 through 5 is available for determining an RTS of each female based on a combination of the previous palpation measurements, along with ovarian length, height and width. A score of 1 would be immature/prepubertal, 2 or 3 refer to peripubertal, with 4 and 5 indicating pubertal females with presence of dominant ovarian structures. A trained veterinarian can perform RTS in a matter of seconds and this practice could be done at Bangs vaccination time if performed no sooner than 10 – 12 months of age. Females with higher RTS are likely more fertile and will conceive earlier in the 1st breeding season, as well as stay in the herd longer than immature prepubertal females. 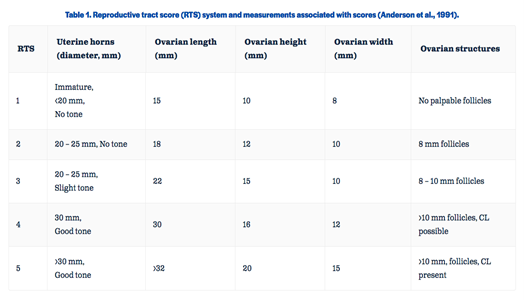 Also, measuring pelvic area is a practice that can be performed in replacement heifers that may be helpful in identifying females that could be prone to future calving difficulty if the pelvic canal is smaller than desired for anticipated calf birth weight. Pelvic area will not likely have an effect on fertility directly; however, it may predict future dystocia events. If dystocia occurs it will decrease pregnancy rates by extending the postpartum period, delaying estrus and reducing conception rates.

Pelvic area is measured using a pelvimeter introduced into the rectum which will measure the height and width of the pelvis at the widest points. These measurements are multiplied together and measures the area in square cm. Average pelvic area for a 600 lb. heifer is 140 cm2 (11.5 cm wide x 12.5 cm high) with the ability to deliver a 67 lb. calf. Pelvic area continues to grow at 0.27 cm2/day until 2 years of age, and then slows through maturity.

These are only some of the management tips that can be implemented into heifer development programs to assist producers in raising heifers that will work for them and keep high-quality females entering the cow herd as replacements year after year.