How Much Can I Pay for a Bred Heifer?

How much you're willing to spend on heifers may depend on your operation.
By: Andrew P. Griffith, University of Tennessee, Agricultural Economics and Marketing

Calf prices have reached record highs, and they are expected to remain strong the next several years. When calf prices begin escalating so does the interest in retaining or purchasing heifers to increase the herd size. This increased interest then results in a rise in prices of replacement breeding stock. The question then becomes how much can a producer afford to pay for a bred heifer or how much can a producer afford to put into developing heifers.

The answer to the aforementioned question requires a number of assumptions, and the result will likely be slightly different across operations depending on available resources and cost structure. Thus, the following assumptions are made for the heifer purchase example:

The stated assumptions alone do not provide enough information to make the purchase price decision. A major factor in the heifer purchase decision is how long she can be expected to stay in the herd. Thus, the accompanying figure provides a representation of how much can be paid for a bred heifer expected to calve in the spring of 2015 given the number of years she is expected to remain productive in the cattle herd. Generally speaking, the longer a cow is expected to be in the herd then the more a producer can potentially pay for her. If it is assumed the cow will produce eight calves over her productive life and cattle prices decline 2.5 percent annually then a producer could pay $3,264 for a bred heifer and still breakeven while a 5.0 percent annual decline in prices would result in a breakeven purchase price of $2,832 per head. Similarly, if that cow only produces five calves prior to being removed from the herd then the maximum purchase price is $2,799 and $2,653 for the 2.5 percent and the 5.0 percent annual decline in calf prices. 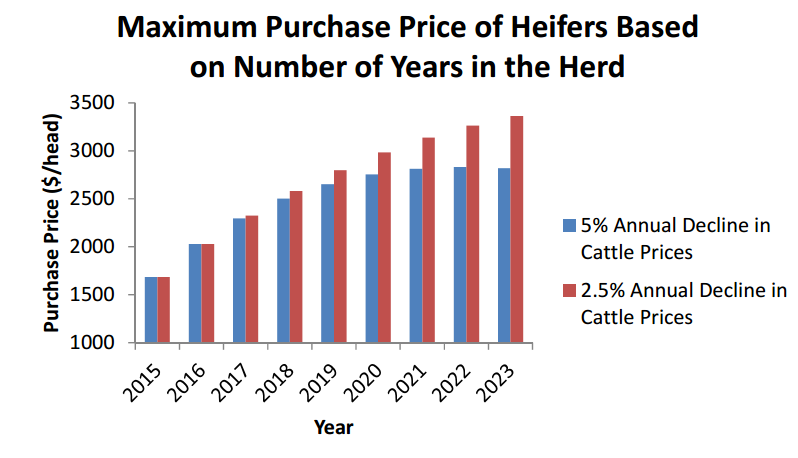 Generally, when a producer purchases bred heifers, some will not make it past year two or three while some may stay in the herd for ten years. This is a cost producers should consider when making the bred heifer purchase decision. Producers should not take the calculated prices from this article as hard and fast numbers because a number of assumptions have been made that can dramatically alter how much can be paid for a bred replacement heifer. Producers are encouraged to consider the cost of production for the particular operation and how long cows typically remain in the herd. Additionally, in this example it was assumed cattle prices will start slowly declining after the 2016 production year and decline through year nine. This is a conservative assumption that greatly influences the decision.

In recent sales across the state of Tennessee, bred heifers have brought between $2,300 and $3,000 per head. These prices are very much in line with the values provided in this article. Many of the assumptions made in this article will not be representative of every operation resulting in different maximum purchase prices. Additional considerations include weight at which calves are marketed, marketing method (weekly auction, graded sale, alliance, truck load lots, etc.), and the quality of heifer being purchased. The bred heifer purchase decision is not a one size fits all decision, but hopefully the presented thought process will benefit producers in this decision.