Wild pig populations in Canada continue to expand rapidly and are completely out of control in the prairie provinces of Saskatchewan, Manitoba and Alberta, says Ryan Brook, an associate professor at the University of Saskatchewan, who studies the reproductive ecology of wild pigs.

Saskatchewan and Manitoba are home to 90% of all known occurrences of wild pigs in Canada. Given this information, Brook created a detailed map of all known wild pig occurrences in these provinces at the scale of the Rural Municipality, comparable to counties in the U.S.

“For producers in Canada or those in the U.S. concerned about wild pigs spilling over from Canada into the U.S., producers can look at the map and/or download the Google Earth files here and view them on any phone, tablet or computer after they install the free Google Earth app or program on their device or run it on any browser,” Brook adds. “Once that is set up, double click on the file and it will open and show all of the Rural Municipalities in Manitoba and Saskatchewan color coded to how many wild pigs have been spotted, with darker colors equaling more pigs.”

How does the tool work?
This new mapping tool allows producers to zoom into their farm and see the lay of the land with respect to the wild pig distribution in their area and the larger landscape. Since the home range of these feral swine is 135 square miles, they can cover large areas. Now producers can discover where the key “hotspots” are, Brook says.

“This tool can be used in combination with farmers’ own experiences and coffee talk about wild pigs in their area. This is especially important for wild pigs because as I’ve been working on this issue now for over a decade, I’ve seen so often how farmers have wild pigs on or near their lands and don’t even know about it because they are primarily nocturnal and hide in the heaviest cover available,” he says. “Unfortunately, that cover is often corn fields where they can do tremendous damage. Some farmers in southwestern Manitoba have said they can’t grow corn anymore because pigs are so destructive.” 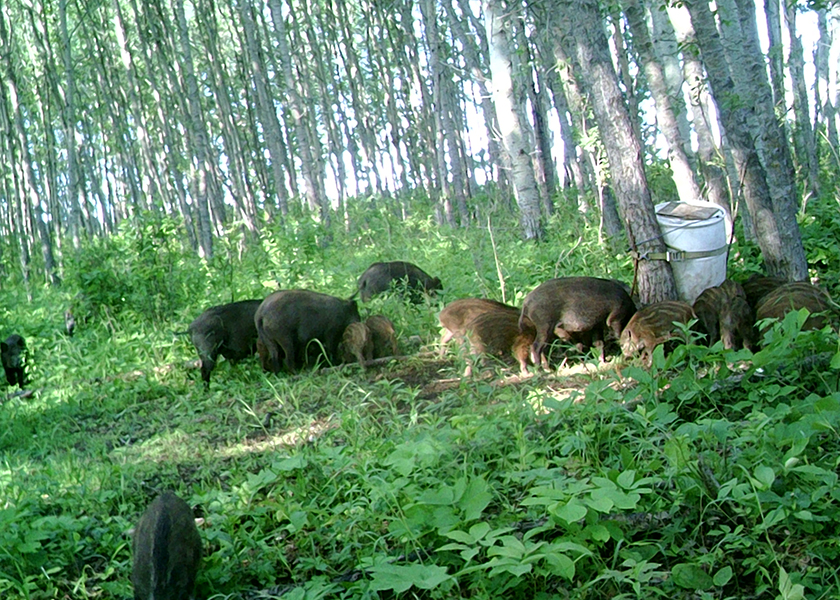 “We know that wild pigs are attracted to all types of feed, from standing crops to spilled feed. Because wild pigs and domestic pigs are the same species, there is also a strong mating attraction. They will be attracted to any sows and gilts in heat,” Brook says.

He hopes this tool will be used to target and remove wild pigs from the landscape. In the meantime, producers can use this information to assess risk to their own farms and consider upgrading biosecurity to keep wild pigs away from domestic pig farms.

“I also encourage swine producers to consider purchasing trail cameras to place around their farms to detect if wild pigs are coming onto or near their farms,” he says.

This is complementary to the tool Brook built. When managing issues like wild pigs, he says there is no ‘one size fits all’ approach. Instead, he encourages producers to build the biggest toolbox possible with as many tools as possible to use as needed on their individual farm. His new mapping tool is one more tool to add to the toolbox, he adds.

Why should U.S. pig farmers take note?
“As wild pigs continue to expand out of control in Canada, the risk of wild pigs moving into the U.S. is very real. This is especially true for North Dakota and Montana, but given how mobile feral swine are, the risks are far beyond that,” Brook says.

This tool highlights areas of concern where pigs have been spotted close to the U.S.-Canada border. He says it also identifies the strongholds of wild pigs that are high functioning wild pig factories. The U.S. has established wild pig populations, but most northern U.S. states have few, if any feral swine. For example, Montana is entirely free of wild pigs at this time.

Although African swine fever (ASF) has not been detected in North America, if it did, Brook says wild pigs serve as a major concern for disease spread.

“It is well established in Asia and Europe that wild pigs can act as a reservoir and vector for ASF. Small investments of time and effort to address this potential disease concern now could prove invaluable,” he says.

Brook’s work has been funded by the USDA, the University of Saskatchewan and SaskPork. The Google map files can be downloaded from Brook’s wild pig Facebook page.

Monster-Sized Wild Pigs are on the Rise in Canada

Feral Swine in the U.S.: An Update on Disease Surveillance

Can You Really Trap Feral Pigs with Your Cell Phone?