Spot cattle and boxed beef prices were highly divergent last week. Support to the live cattle side had been built on positive COVID-19 vaccine news and resulting equity market upticks spilling over to CME Live Cattle contracts. But, that momentum deteriorated at week’s end, just in time to tamp down cattle feeder resolve and packer bids.

There is, however, renewed optimism this week in the cattle markets because October feedlot placement data showed an 11% decline compared to a year ago. That provided a flash of bullish news, setting futures on a higher trajectory in tandem with record high equity indexes this week. 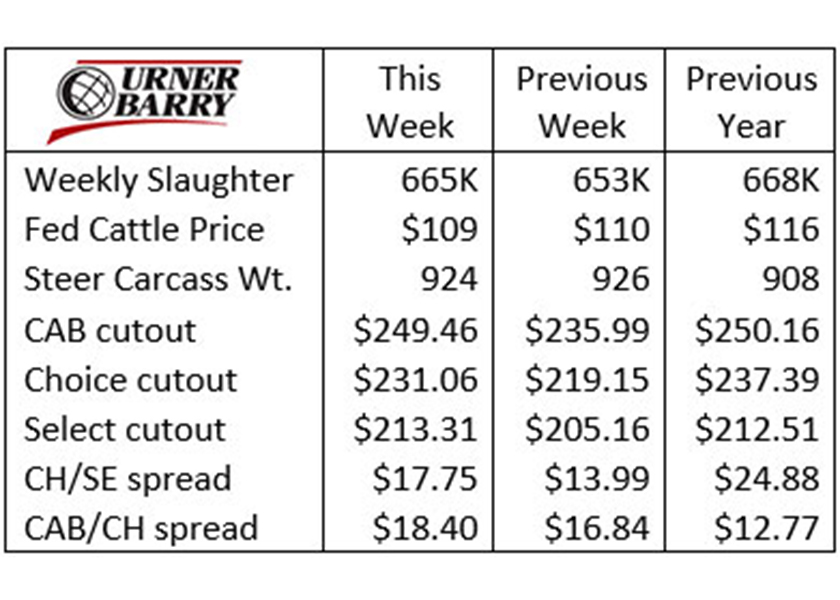 The boxed beef cutout activity presented quite a different picture in the weekly summary, as the CAB cutout price jumped $14/cwt. to average $249/cwt. No stronger signal can be sent through the demand channels.

Consider for a moment the continued issues at foodservice and restricted dining capacity in the U.S. Of course, people have to eat and clearly the retail sector is capturing the increased beef sales volume.

Still, few would expect to see beef demand closely matching that of a year ago, given the restaurant trade disruption. Prices are virtually the same while weekly beef production volume is slightly higher than a year ago, up 1.7% in the latest report.

A closer look at the CAB carcass complex shows ribs unsurprisingly driving a big portion of last week’s run-up. The rib primal was up a tremendous $55.78/cwt. in just one week. End meats followed next with both the chuck and round primals higher by $9/cwt.

First Sales of CAB in China

The first shipments of the Certified Angus Beef ® (CAB®) brand arrived in China in November, ushering in the potential for a new, powerful buyer for high-quality U.S. beef.

COFCO Premier Foods Shanghai became the first licensee in that country this summer, and it debuted the brand at the largest food show in the region. The company has a strong online presence for selling high-end perishable imports, but also services retail and foodservice distribution channels throughout China.

The first two containers arrived weeks ago, with more planned in December. Initial U.S. beef business in China was driven simply on getting movement through the channels, but pull-through demand for the brand inevitably presented opportunity for CAB-specific sales.

Beef exports going to China is not a new topic of conversation, as the production sector has looked toward the possibility of that strong presence in the market for quite some time.

In March, China lifted barriers that required participation in the special USDA Export Verification Program for the country, adopting the common maximum allowances for hormone residuals, but maintaining its zero tolerance for the beta-agonist ractopamine. Although beef from implanted cattle can go to China, it’s being sourced through special supply arrangements. That could be an affidavit or processor level testing, or cattle that come through non-hormone treated cattle (NHTC) or natural programs. 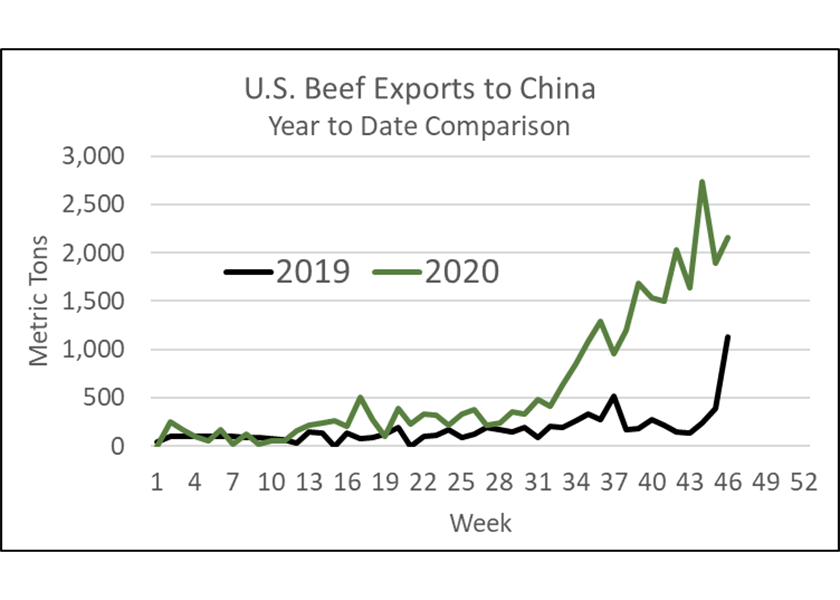 In the Phase One trade deal brokered last January, China committed to importing $200 billion more than 2017 levels. According to the U.S. Meat Export Federation, The People’s Republic of China has moved from importing a modest 8,372 million metric tons of beef in 2019, to 28,389 MMT through mid-November. That moves them to the seventh- largest target for U.S. beef in 2020, with much of that tonnage coming in the latter part of the year. (Hong Kong is not included in those numbers.)

Early involvement is important in the developing market as there is immense growth potential. Historically, Asian markets contribute significantly to the brand’s international business with long-established partnerships in places like Taiwan, South Korea and Japan.

China has a middle class estimated 400 million people strong, used to consuming imported grass-fed beef with little marbling. Yet, they’re exposed to high-quality beef when they travel or study overseas.

The relationship with CAB is just starting to grow, but our sales team is optimistic about the potential.

The bottom line for cattlemen is this: China represents a bullish demand signal for highly marbled beef. They will compete against other top export targets, and having more buyers in the market always bodes well for the seller who has what the market wants.

Just ahead of the Thanksgiving holiday we’re resting on what has been a solid holiday run-up in beef carcass cutout values. The trajectory over the past two weeks has shown a sharper price increase than that of a year ago, yet the end result as of a week ago is a cutout value just pennies below last year’s.

Both 2019 and 2020 have shown a stronger cutout rally in the first half of November than the three years preceding. Of course, the beef market in the last two years has been affected by abnormal conditions. 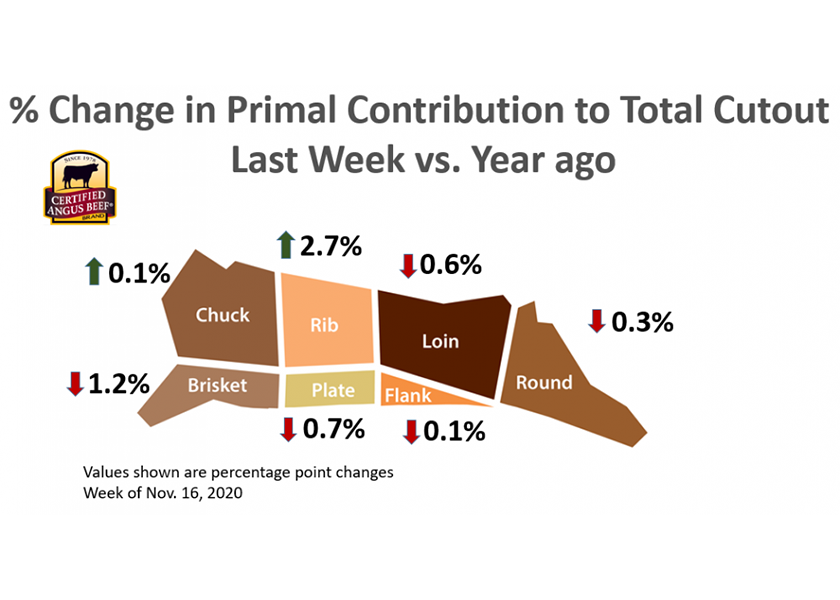 With all of this said, holiday rib demand is a driver for the cutout price into mid-November. This year the rib primal is even more impactful to total carcass value. The CAB rib, as of last week, contributed 2.7% more to the total CAB carcass cutout than it did a year ago, evident in the fact that bone-in CAB ribeyes reached a record high last week.

Simultaneously, brisket prices are much more subdued this season compared to a year ago due to lack of foodservice demand. This resulted in a 1.2% decline in the brisket value contribution to the total CAB carcass.