Selk: A Long, Difficult Calf Delivery Can Have Hidden Costs

Throughout the beef industry, there exist hidden costs that are difficult to expose and equally difficult to eliminate. One of those hidden costs can be caused by an extended “postpartum interval” (the number of days from calving until the cow returns to heat cycles.).

Several biological influencers can lengthen the days between calving and return to estrus cycles.  Most of the causes that delay the return to cycling activity are centered around nutrition.  However, one of the lesser-known causes of a delay to cycling activity is a prolonged, difficult process of calving.

During parturition (calving), the cow goes through three stages of labor.  Stage 2 is where most of the action occurs.  Stage 2 begins with the appearance of the water bag or baby calf’s feet.  Stage 2 ends when the calf is completely delivered.  Recall that stage 2 is expected to be about one hour for a two-year-old and about half an hour in mature cows that have previously delivered calves.  Some producers may wonder if there is anything detrimental about allowing cows or heifers to suffer through a prolonged stage 2.

In addition to being the greatest cause of baby calf mortality, calving difficulty markedly reduces reproductive performance during the next breeding season. Cattle suffering from calving difficulty have been reported (Brinks, et al. 1973) to have pregnancy rates decreased by 14% and those that did become pregnant to calve 13 days later at the next calving.

Results from a Montana study (Doornbos, et al., 1984) showed that heifers receiving assistance in early stage 2 of parturition returned to heat earlier in the post-calving period and had higher pregnancy rates than heifers receiving traditionally accepted obstetric assistance. In this study, heifers were either assisted about one hour after the fetal membranes (water bag) appeared (EARLY) or were assisted only if calving was not completed within two hours of the appearance of the water bag (LATE). 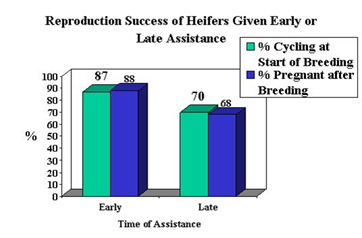 Heifers that were allowed to endure a prolonged labor (LATE) had a 17% lower rate of cycling at the start of the next breeding season. In addition, the rebreeding percentage was 20% lower than the counterparts (EARLY) that were given assistance in the first hour of labor.  The calves weaned the following year from cows that endured the long delivery weaned 46 pounds lighter than calves from cows with earlier re-breeding dates due to a shorter stage 2 of parturition.

Always check to be certain that cervical dilation has been completed, before you start to pull the calf.  If you are uncertain about whether cervical dilation has taken place or if the calf is in an undeliverable position, call your large animal veterinarian immediately.   Prolonged deliveries of baby calves (in excess of 1.5 or 2 hours) often result in weakened calves and reduced rebreeding performance in young cows!