Feeder cattle auction volumes in Oklahoma are quite variable in February and March.  Dual-purpose wheat production (graze and grain) means that grazing cattle must be removed promptly when the wheat crop begins the reproductive stage that produces a grain crop. This change in the wheat is indicated by monitoring wheat plants for “First Hollow Stem”.

The timing of first hollow stem in wheat pasture varies by year as well as across wheat varieties.   The abrupt termination of wheat grazing that results from the physiological demands of wheat often results in a week or two of noticeably larger auction volumes occurring between mid-February to mid-March.  Figure 1 shows the Oklahoma weekly auction volume for the 2018-2019 average, 2020 and thus far in 2021.  In 2018-2019, the largest weekly volume occurred in the second week of March while in 2020 the largest weekly volume occurred in mid-February. 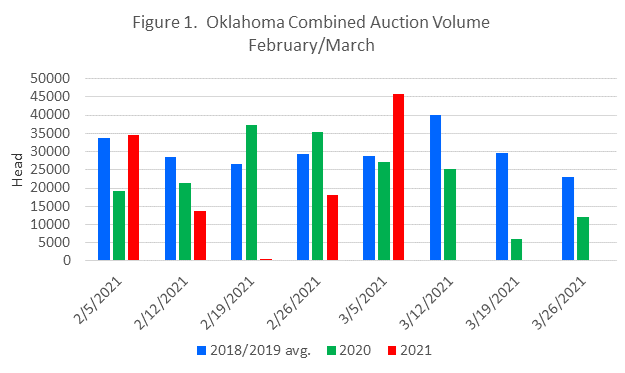 Additional challenges in 2021 resulted from the extended winter storm in February.  Many auctions in the state were closed for one or two weeks with typical feeder cattle marketing delayed.  Figure 1 shows the dramatic reduction in auction sales in the middle week of February (664 head) and reduced volume the third week of February.  It was not a surprise to see an extremely large volume of 45,702 head the first week of March.  This volume likely consisted mostly of feeders delayed from February but may also include some wheat pasture cattle.  The bulk of the wheat pasture cattle are expected the next two weeks and large auction volumes are expected until mid-March.

Prices for calves and stocker cattle were higher last week reflecting some spring grazing demand and relatively low volumes of lightweight cattle this time of year.  For example, the price of 450-500 pound, Med/Lrg #1 steers was $179.37/cwt.  Calf prices are following close to a typical seasonal pattern and are up 5-6 percent from last fall.  Heavy feeder prices have remained generally steady the past few weeks and are currently about two percent lower compared to last fall; slightly lower than seasonal patterns would suggest.  The price of feeder steers weighing 750-800 pounds (Med/Lrg, #1) was $133.74/cwt., unchanged from the week prior.  The large auction volume last week included a majority of heavy feeders.