Last week’s fed cattle trade rounded out February and a full month of $114/cwt. weekly average prices. The two weeks in the middle of the month marked by extreme weather and insufficient fed cattle to harvest-space put a cap on cattle prices as packers found themselves well-supplied.

The large 666K-head federally inspected slaughter last week was packers’ best effort at backfilling the boxed beef pipeline as processing logistics returned to normal. Unfortunately for cattle feeders, the short-term bottleneck came at a time when finished cattle inventories were still bulging. Look for another large weekly slaughter this week, as packers have every incentive to keep the pipeline full. 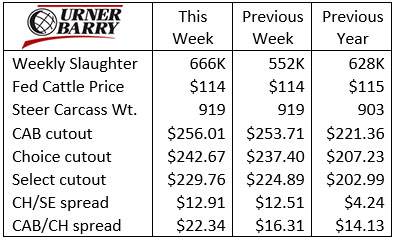 The carcass weight issue has become quite a tired topic for many of us but looking at it through a different lens puts it in perspective. Multiplying that 20 lb. of extra weight across 500,000 head, for example, yields the equivalent of an additional 11,627 lb. of carcasses. Granted, increased production is coming through the system in larger cuts of boxed beef and grinds, which don’t use any additional shackle space in the packing plant. Yet the added tonnage on the market is not insignificant.

Cutout values have been on an amazing departure from seasonal norms through February, reaching their second highest point in history for the month. February 2015 posted a higher cutout price peak than February 2021 but fed cattle supplies were in a shortage then. Even with the weather interruptions in the packing sector last month the weekly slaughter totals for fed cattle were 14% larger than in February 2015.

Ribeyes and strip loins are still pricing well above their normal range for the past few weeks and middle meats continue to be the hot subprimal price movers. A break in boxed beef prices is surely coming ahead of the spring buying frenzy.

In the last edition of the Insider, we focused on the Choice/Select price spread. So far in 2021, Choice carcasses are at a higher premium to Select than in any of the previous five years. This is important, not because Choice carcasses are the production target, but because the producer’s share of the Choice premium is the foundation on which CAB and Prime premiums are added. Since January 1, the USDA Grid Premiums and Discounts report shows an average Choice premium of $12.08/cwt. compared to the five-year average of $5.49/cwt.

Successful grid marketing in today’s production environment often requires a higher degree of marbling achievement than the Choice grade. When yield grade 4 and heavyweight carcasses are as prevalent as they’ve been for months, it takes more premiums to surpass the discounts.

Fortunately, CAB and Prime premiums have remained at elevated price points thus far in the 1st quarter. The charts illustrate the CAB premium on a higher trajectory than any of the previous five years, reaching a $5.59/cwt. weighted average across packers in the latest data. It’s notable that CAB-certified carcasses have also been more numerous on a weekly basis than in any of the comparison years. 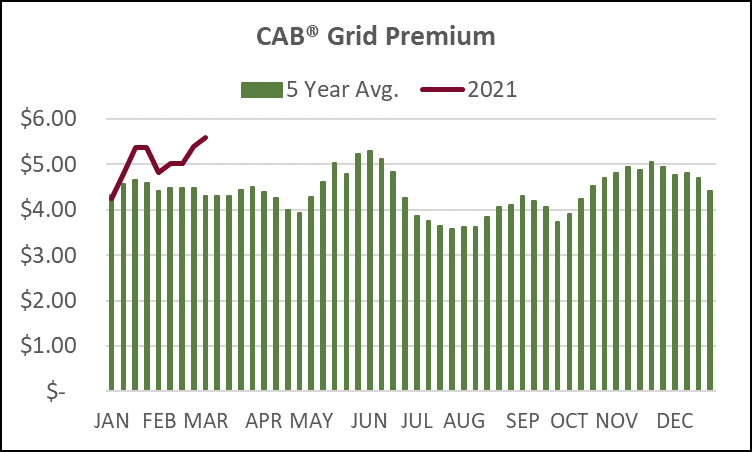 A similar picture exists for Prime grid premium vales in 2021 as well. The year-to-date Prime premium has averaged $15.07/cwt., which is $1.79/cwt. above the five-year average. The Prime comparison differs from the CAB premium comparison in that the Prime price was higher in 2018 for the time period described.

It’s also clear in the charts that the Prime grid price is on a decreasing plane since mid-January. This stands in contrast to the increasing CAB premium, although both of these carcass categories have seen plentiful supplies in 2021 as a proportion of the total. 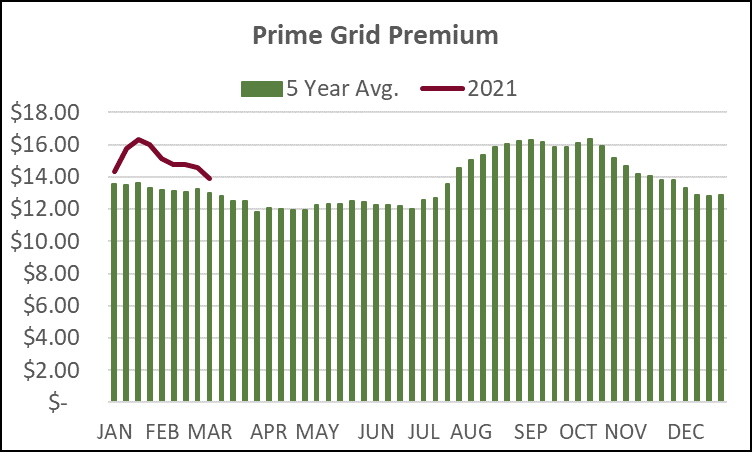 The fact that Prime carcasses constituted almost 12% of the national steer and heifer carcass mix for the week of February 15th is the likely cause behind the premium decline we’re describing. This is easily a record Prime share of the total during a period that has seen 6% to 10% Prime carcasses in February of the previous five years.

This detailed assessment of high marbling, premium carcass trends is more than rhetoric from a source vested in the premium branded beef business. Rather, it’s a depiction of the true price drivers in today’s beef market. During a period in which frustration is abundant surrounding price discovery and price mechanisms for fed cattle, these are price signals that are above expectations compared to most recent years. While the noted challenges are very real and not to be dismissed, we’re simultaneously experiencing exceptional beef demand for the very best product that we collectively have to offer.

GENETICS MAKE ALL THE DIFFERENCE

Spring bull sales have been well underway for weeks and the market for quality Angus bulls is proving to be quite good again. Genetic merit is so important to the total production picture—it’s the one decision that we make every year with intentions that our investment pays off in accrued benefits over time.

Selecting bulls that will sire replacement heifers opens up the entire array of EPDs and selection indexes as potential priorities for cow/calf producers. Understandably, when selecting bulls in herds where replacement heifer will be kept, cattlemen rank marbling below their top five priorities. The prioritization process often hinges on how engaged the producer is with the next sector of the beef supply chain. Those retaining ownership through the feedlot and others marketing feeder calves with a reputation for performance and carcass merit will likely deploy minimum thresholds for terminal traits, such as carcass merit and post weaning growth.

Our Targeting the Brand™ program assists Angus bull buyers in readily identifying bulls that should sire calves with above-average potential to meet the CAB brand specifications at harvest. With a goal of at least 50% CAB accepted carcasses, the thresholds for both the Marbling EPD and $Grid indexes for the program have been set to easily identify qualified sires whose progeny will distance themselves from the industry average of 36% CAB acceptance.

If you’re pursuing a degree of carcass merit among the litany of traits important to your operation, then marking bulls in your sale catalog with the Targeting the Brand™ logo adjacent to them is an excellent place to start.