Between 2001 and 2016, 11 million acres of farmland and ranchland were converted to urban and highly developed land use or low-density residential land use. ( American Farmland Trust )

Two thousand acres of farmland are lost every day, increasing the pressure for farmers to grow more food on less land to feed a growing population.

Low-density residential (LDR) development claimed 7 million acres of agricultural land between 2001 and 2016, according to a new report, “Farms Under Threat: The State of the States” by the American Farmland Trust.

“Protecting farmland and ranchland is critical for all types of agriculture, but livestock producers are some of the hardest hit by sprawling, LDR development,” says Mitch Hunter, research director at American Farmland Trust.

Large-lot housing on 1-to-20-acre parcels is stifling out farmland.

“All across the country, scattered, large-lot housing has been fragmenting and disrupting farming and ranching for years,” says John Piotti, president of American Farmland Trust. “Until this report, no one has been able to map and measure it.”

This is not a surprise to farmers and ranchers with medium- to large-city neighbors, and it is cause for concern. Agricultural land in LDR land areas was 23 times more likely to be urbanized than other agricultural land.

“When non-farming neighbors start moving in, it gets much harder to farm,” Piotti says.

For pig farmers, in particular, the rise of LDR development is causing more and more challenges as people move into closer proximity with animal agriculture.

For North Carolina, the No. 2 most threatened state for agricultural land conversion, this increase of people moving closer to animal agriculture has resulted in more nuisance lawsuits.

"Many non-farmers aren't aware of what it takes to raise livestock, which can lead to disputes and even nuisance lawsuits over odors and noises that are a standard part of livestock husbandry. Even having a few scattered houses on the landscape, which may not look like it threatens agriculture, can make it a lot harder to farm," Hunter says.

From 2001 to 2016, 11 million acres of agricultural land were paved over, fragmented, or converted to other uses, according to the report.

“That means, farmers and ranchers, on average, have 2,000 less acres every day on which to work to feed our communities, to sequester carbon, to make a living and support their families,” Piotti says.

The AFT report layers on the productivity of the farmland to identify nationally significant land. This designation includes the most productive, versatile and resilient (PVR) land for sustainable food and crop production.

From 2001 to 2016, 11 million acres of agricultural land were paved over, fragmented or converted to other uses. Of that total,

The Most Threatened States for Agricultural Land Conversion*

*based on the amount of agricultural land converted from 2001 to 2016. The rapid pace of conversion in these states can be partly explained by population growth and weak land use policies, according to American Farmland Trust 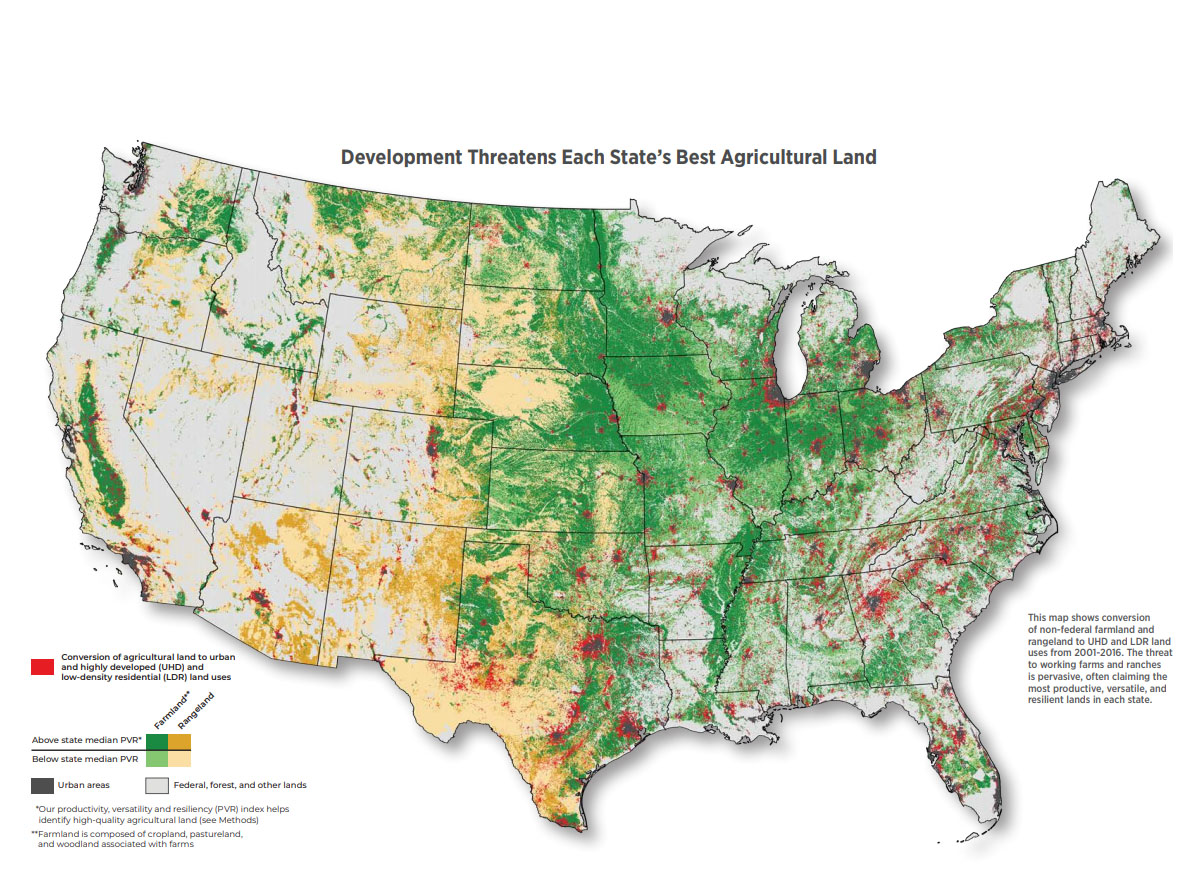 This map from American Farmland Trust shows, in red, where non-federal farmland and rangeland were converted to urban and highly developed land or low-density residential land.

See maps, policy scorecards and more in the American Farmland Trust's “Farms Under Threat: The State of America’s Farmland” report.

Farmland Disappearing at an Alarming Rate

Students Set Out to Tell “A Showman’s Story”