Farmers and ranchers have responded with scorn for the most part to burgeoning artificial meat offerings pouring into the food market. When I addressed this question a few months ago on US Farm Report, I essentially stalled to see how sales of the Impossible Whopper and other products went. Was it going to be New Coke or Diet Coke?

It’s still early innings, of course, but artificial meat is not an immediate disaster. My own taste test was informative – not much difference between a condiment-slathered Impossibility and the usual. It seems a viable substitute to me. Meanwhile, more heavyweights like McDonalds and Costco are joining the trend seemingly weekly. The parallel to car companies and electric vehicles is unnerving.

The meat industry is not amused. They raise legitimate questions and criticisms. There is little nutritional benefit, such as lower calories, cholesterol, or other nutrients. It is more highly processed compared to natural meat. The ecological tradeoffs would seem to benefit fake meats, but calculations are in the eye of the beholder. Artificial meat is more expensive (but so was solar power just a few years ago). Above all, they point out it is ARTIFICIAL, which is odd for an industry that gets tied in knots over the label “natural”.

Our objections to fake meats may not matter much, or even be valid. An industry that came up with LFTB – notoriously labeled “pink slime” – and HFCS may not be taken seriously when railing about processed foods. Likewise, agriculture’s long and strident opposition to environmentalism, and climate change in particular makes their ecological math subject to skepticism. Trying to pose the market challenge as natural versus artificial ignores too many previous losing battles. The most notable case, I think, is Cool Whip.

We are deep into pumpkin pie season, and my fading generation may be the last to prefer whipped cream over whipped topping – specifically Cool Whip. Despite having lived with a superb cook who makes whipped cream to Jacques Pepin-standards, our sons simply prefer Cool Whip. They are not alone, although some of us dare not admit it. Convenience, stability, and refrigerator life are important pluses, but it is the taste and mouth-feel that drives loyalty. “Real” foods can struggle to compete with engineered competitors. It’s why shakes and soft-serve are crowding out milkshakes and ice cream.

The ability of the food industry to measure our pleasure responses and devise molecules to exploit them is not science fiction. It is the grocery shelf. Food scientists are increasingly adept at pushing our taste buttons. There are some alarming predictions about this trend, extending all the way to near disappearance of our livestock model, and cattle in particular.

While I think some meat-shy consumers, especially younger ones, are sincere about GHG linkages to meat, my own hunch is aversion to meat derives from another more obvious source: CAFOs. Large livestock operations are simply unattractive to many consumers, no matter how well run. The sheer scale can be a turnoff. Abuse videos certainly don’t help, but the most pristine CAFO is still a sea of caged animals in anyone’s eyes. My own guess is we are one hurricane-triggered manure flood from the collapse of this business model.

The moral standards of human-animal relationships have not suddenly become overly sensitive. Social scientists have followed this for decades. What has changed is we now have social media to bray our derision and attack those who make new buying decisions. Meanwhile, we no longer attend bear-baiting, bullfighting is clearly fading despite strong nationalistic cultural ties, and more people depend on animals for companionship amidst a loneliness epidemic. It is unrealistic to expect indifference to even previously acceptable animal agriculture practices.

Until now, this distaste was slight enough to occasionally regret the provenance and order the burger anyway, but with the emergence of a viable alternative, there is no need for consumers to be discomfited at all. Livestock producers who rail against vegetarians, and vegans in particular, are misguided. That portion of the US population has been fairly consistent (5%-7%) for years. It is not clandestine videographers or college protestors who will transform this market. It’s meat-eaters who can ease a vague disquiet with little personal effort by choosing artificial meats. Those who think it can’t happen because the flavor is different should ask my generation about the contempt heaped on lite beer at its introduction. Now, to my horror, entire generations think it is what beer should taste like, all based on the dubious belief we can satisfy our alcohol consumption and avoid a beerbelly. We can train our tastes to harmonize with our beliefs.

Nor will this competition be exempted from geopolitics. As we shift from the path of gradually freer trade to grudging exchanges skewed by economically irrational advantages for politically favored industries, protein will be a logical target for former overseas customers now seen as foes. Look at Asian cuisine. There is a reason why chopsticks suffice, and steak knives are unknown. While cultured meats may someday be up to competing with slab protein (steaks, roasts, etc.), creating artificial ingredients for Mongolian Beef or tacos is already within reach. Emerging economic powers will not struggle with the status signaling of meat. Chinese culture has no equivalent to our Rockwellian linkage of Big Protein with plenty. Even the romance of cowboys elicits far less attraction across global culture. When was the last Western series or movie at the top of the chart?

While there is a strong correlation between rising incomes and protein consumption there is a common sense link between high income and being more picky about what we eat. Non-beggars can be choosers, so to speak. Nor are the patterns of increased meat intake destined to follow Western countries. It may be that during this phase of adding meat to a diet, disruption by throwing fake meat onto the menu will prompt faster growth of artificial protein by addition than the replacement rate in societies like the US. Consumption growth is a golden opportunity to normalize artificial meats in diets.

Fake meats almost certainly are on the leadership agenda for protein-deficit, people-abundant societies. Plant-based meats would ease cultural problems for fast food companies in India, for example. Extremely limited land resources could produce artificial meats multifold compared to processing through a spectacularly inefficient (10:1 feed ratio) cow. Even partially relieving the ideological problems of having to buy feed and meat from a global adversary – which is how we are often seen now – would be a huge boost to such economies and governments. As well, it is undoubtedly not lost on Asian leaders that ASF (or FMD, or PED, etc.) can’t happen with artificial meats.

Few countries now lack the intellectual resources to make it happen - artificial meat is not rocket surgery. Already several manufacturers and processes are competing for market share, promising technological, economic, and acceptability advances. The number of those food companies and the size of the investments is not proof their foresight is right, but it is not the whim of a few wealthy crackpots either. The easier targets will be societies with protein consumption upside, not 220-pounds-per-year Americans. The fate of artificial meats here may be the least of our worries.

The meat industry may be misled as well by recent robust domestic consumption figures. 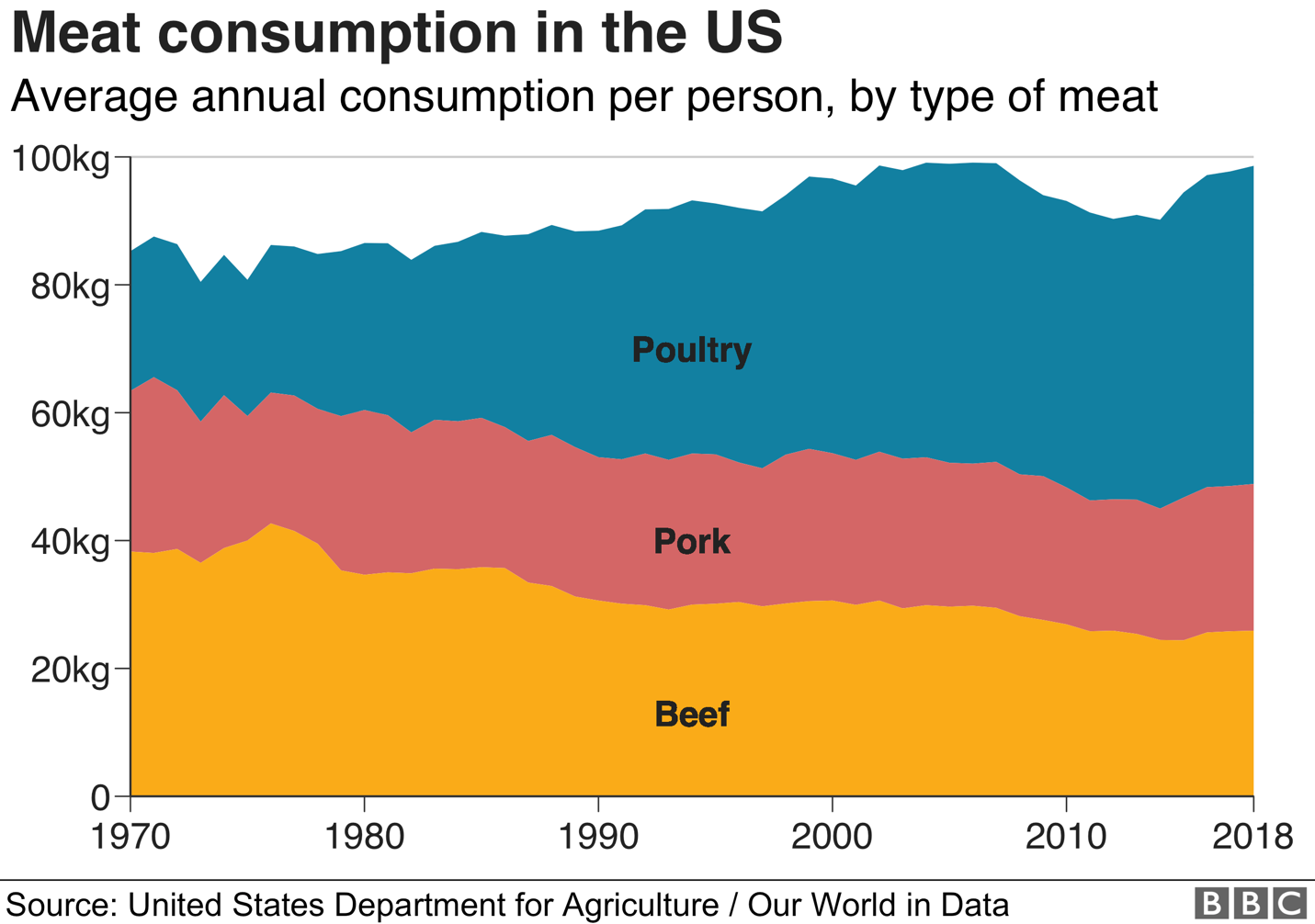 However, as one veteran ag economist explained to me, meat consumption is largely driven by production – grow it and they will buy, so to speak. Since meat storage is expensive and somewhat time-limited, retail prices will drop to market clearing levels to move the product. Free turkeys at supermarkets before the holidays are a common event, for example.

Sure, 72 percent is a huge majority, no doubt. The real takeaway for me, however, wasn’t that most Americans wanted meat from cows. The real meat of the matter for me was that a whopping 28 percent of Americans say they’d choose cow-free beef (whether grown from plants or cultured) were it priced competitively.”

While the majority of consumers may choose beef over fake meat when priced the same, that other 28% should get our attention.

This could be the principal market phenomenon for American livestock producers as our export safety valve has been clogged by the trade wars. The chain reaction down the feed industry will be equally jarring.

Mocking vegans and food extremists will not alter the arc of change for our one-product industry, however momentarily satisfying it may be. The possibility the meat industry’s only output could diminish to elite merchandise like foie gras cannot be dismissed summarily. We should heed the wisdom of Yogi Berra, who pointed out, “If people don’t wanna come out to the ballpark, nobody’s gonna stop ‘em”.