A Break From the Record-Breaking Cold In Store Next Week

Brutally cold air blasted across much of the country this week, proving to be a challenge for livestock producers. But the worst may be yet to come. Forecasts point to record-shattering cold this weekend in many areas, along with possible record-breaking snow in parts of the South.

Meteorologist Mike Hoffman says as the country braces for more cold, there will be a slight break in the pattern next week.

“The jet stream this week shows the coldest air has been underneath this Southern extent of the polar vortex,” says Hoffman. “That's a piece that's going to rotate through the upper Great Lakes as we head through the rest of this weekend and in early in the week. So, the cold air is still definitely there. But that moves east.”

Hoffman says as the pattern shifts, much of the U.S. will still face cold weather, but not record-breaking cold like many will experience this weekend.

“This is still very cold mind you but not as cold as we head through Wednesday,” says Hoffman. “But this also shows these storm systems moving from west to east that will continue to move eastward and yet another one comes in as we head through next weekend. Notice though, overall, it's more zonal up along the Canadian border that means the coldest air retreats in the central in northern Canada as we head into the following week.”

While the cold and snow has been an issue much of this week, the moisture may help the overall moisture picture across the country

“The root zone has become drier lately, overall, but I think this week that we may reverse that trend,” says Hoffman. 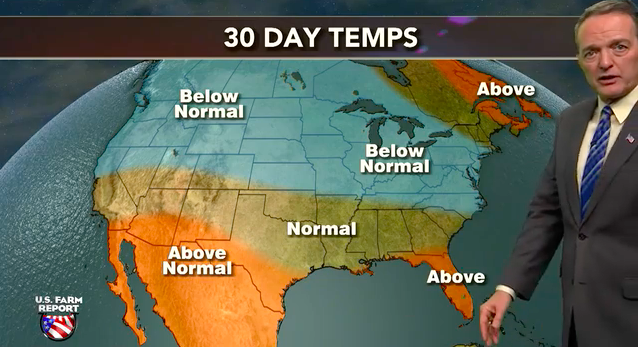