The research was done through questionnaires sent to 258 meat buyers of department stores and supermarkets from October, 23 through November 16, 2015. The questionnaire asked the buyers to score 17 different categories, and 143 buyers responded.

U.S. beef received the highest scores in several categories, such as adequacy of price, profitability, promotion supports with POP & in-store tasting, and consumer campaign with PR & events. U.S. beef also received high marks for low price, sales staff, supply availability, leanness, and repurchase rate. U.S. beef also earned high scores for its taste, equaling the scores of many major domestic brands. Many of these high scores for U.S. beef can be accredited to the successful marketing activities that have been carried out by the U.S. Meat Export Federation.

Although Australian beef did not rank as high as the U.S. in the taste category, it did get the highest scores for supply availability, low price, lean meat, and sales staff. Australian beef also received a higher score than the U.S. in the area of safety (10 compared with a 6 for the U.S.), but it scored lower in this category than domestic beef brands.

The areas where U.S. beef did not score as highly as other brands were safety, strength of brand, information disclosure about traceability. In these areas, domestic beef scored higher than U.S. beef. Although not reflecting actual safety levels, this survey is a useful indicator of the perceptions among traders about various beef brands in Japan.

The research also asked about buyers’ criteria for making decisions on their beef procurement, and the chart below lists the criteria in order of importance. The highest priority was given to quality (freshness and exterior) – 78%. The second was taste – 68%, and the third was supply availability – 62%, the fourth was high level of safety – 55% and the fifth was marbling – 42%. Surprisingly, these were all shown to be more important than low price, which came in at 36%. A majority of the buyers are interested in increasing sales of lean meat, which can be a marketing advantage for U.S. suppliers. 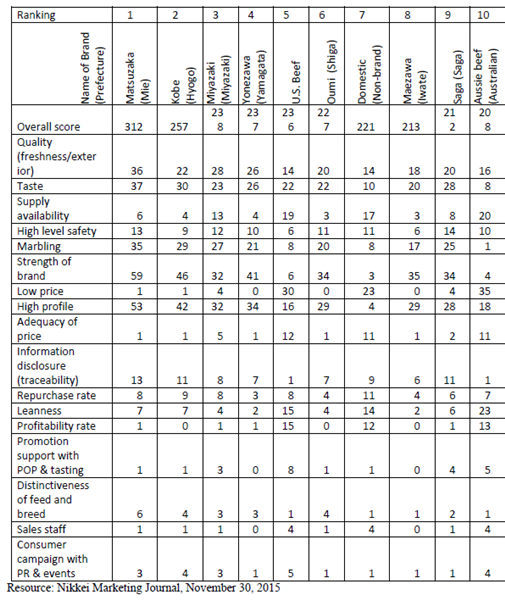