Forbidden: The Curious Case of an Agriculture Loan Denied

Rhoda Rein was stunned by the bank’s decision—agriculture loan denied. The 25-year U.S. Bank customer, anticipating approval on a $27,000 operating loan, listened in disbelief as a bank representative cited the rationale behind Rein’s denial: animal reproduction is forbidden.

Is animal reproduction an activity deemed ineligible for a bank loan? Yes, in Rein’s case, and the rejection was triggered specifically due to her operation’s involvement in horse breeding. The details of Rein’s loan denial may draw concern from livestock producers across the United States, particularly due to the explicit language in bank documents delineating Rein’s rejection, and the seemingly contradictory explanations offered by U.S. Bank.

Twenty minutes east of Denver, alongside her husband, Darren Miller, Rein runs a 46-stall horse training and breeding business on 40 acres—Darren Miller Stables, Inc. Rein, 53, and Miller, 57, were instrumental in founding the Colorado Reined Cowhorse Association (CRCA), and have served on the board of directors for the RMQHA, RMRHA and NRCHA. Miller is an AQHA, NRCHA and NSHA judge.

Since the mid-1990s, Rein has been a client of U.S. Bank at the Hampden Crossing branch, obtaining business loans on a consistent basis. In 2003, she opened a line of credit (cash flow manager) attached to Darren Miller Stables, revolving at a roughly 8% interest rate. In 2018, the interest rate steadily rose, climbing to 11.25% by April 2019. Alarmed, Rein consulted with Tracey Romero, her U.S. Bank representative, regarding a rate decrease. Boiled down, Rein chose to apply for a brand new loan of $27,000: Wipe the slate clean and start over with a lower interest rate. According to Rein, the NAICS code 112920 (equine production) was used in the loan application. 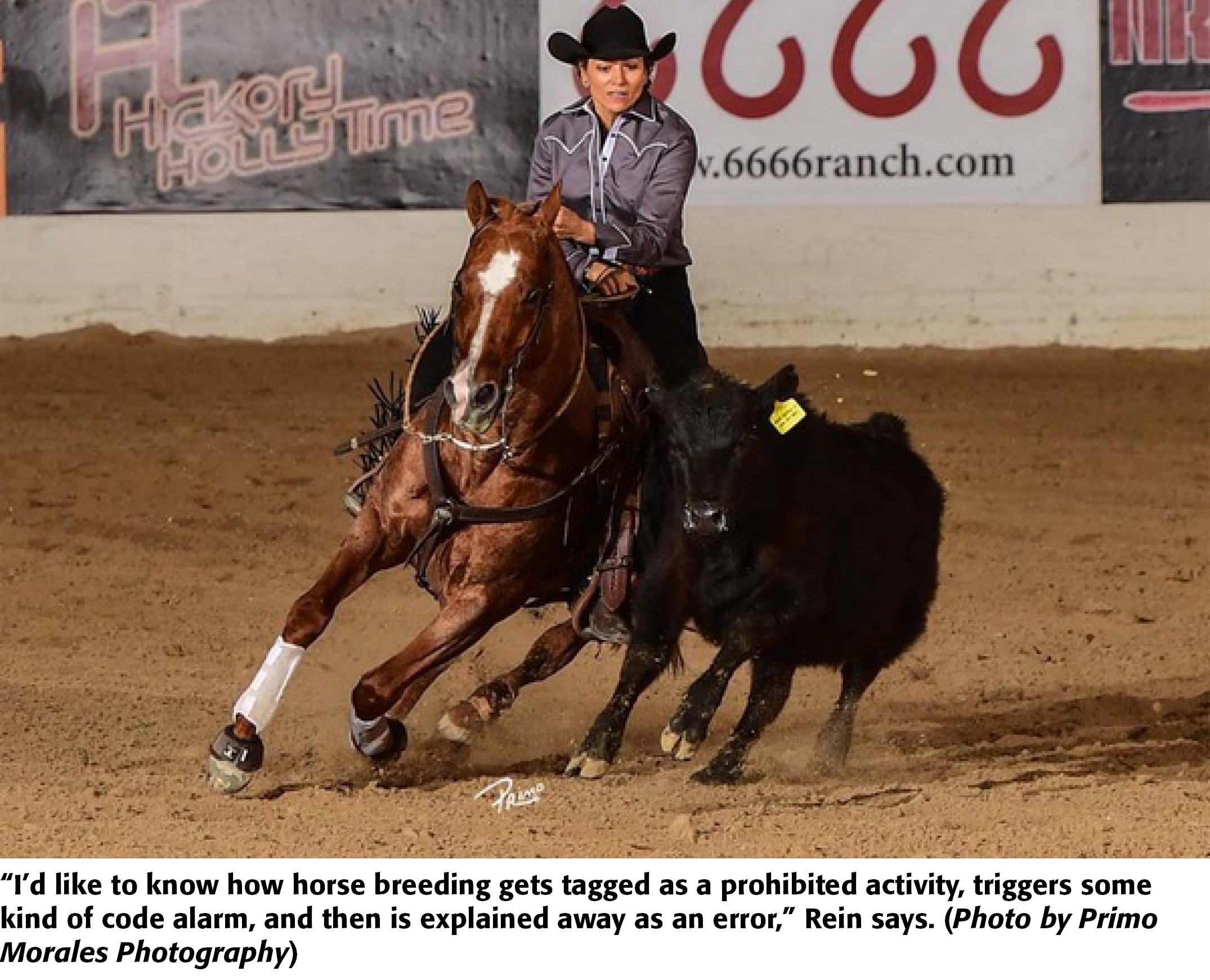 On May 1, U.S. Bank sent Rein an explanatory letter: “After careful review of your application, we are unable to extend credit to you at this time for the following reasons: Product is not considered appropriate for this industry.”

Rein visited the Hampden Crossing branch to get an explanation on May 8. “I couldn’t believe it and Tracey also seemed shocked,” Rein recalls. “I went into Tracey’s office and she said we’d been denied because we engaged in animal reproduction. She had already appealed because it was an existing line of credit with a big history. We’d been there almost 30 years, but even the appeal was denied.”

Erik Venning, Hampden Crossing branch manager, was also present, according to Rein. “Erik walked in and spoke with us, and listened while Tracey read off of a piece of paper out loud: ‘It says the reason you’re denied has something to do with animal reproduction.’”

(The Hampden Crossing branch of U.S. Bank was contacted by Farm Journal and directed all questions toward U.S. Bank communications.)

Seated on the opposite side of the desk, Rein could not make out the text on the paper. “I asked them for a copy of the paper, but Tracey said, ‘I can’t give it to you; it’s an internal document.’ I was allowed to listen to the text, but not allowed to read what was on the paper. Still today, I’ve never seen the document.”

Significantly, Darren Miller Stables’ income was derived almost entirely from horse training, Rein explains. “I could prove to U.S. Bank that only 10% of our income was from animal reproduction, and Tracey told me when she appealed the underwriter’s decision, she told them that, but that U.S. Bank had a list of internal businesses it didn’t support. The underwriter didn’t have a problem with horse training, but an issue with animal reproduction. Seriously?”

In past years, Rein typically used the $27,000 for hay and equipment purchases or to provide a bit of cushion when a given client made a late payment. Significantly, when the interest rate reached 11.25 percent, Rein paid off the loan in full on March 26, 2019 (a $21,570 payment)—several weeks prior to applying for the new loan. Her reapplication involved no carryover because the loan had a zero balance.

“I was a customer in good standing, but when we were in the bank office going over the denial, Tracey said, ‘U.S. Bank has the right to decide who it does business with, even if the people are engaged in a legal activity.’ Does that mean because we breed horses we’re not worthy of a loan, or we’re involved in inhumane activity? Our credit score is in the 800s and you would think we would be the customers the bank would be looking for,” Rein says.

Two days later, on May 10, her dismay turned to confusion. In a phone call, Venning announced approval of her loan at 10%, according to Rein. Ironically, the rate, which she considered high, had spurred her initial reapplication of the entire process. “Erik said they’d discussed everything with upper level management, realized the denial was a mistake, and offered me a new loan. But high interest is why I complained in the very beginning. They had approved the loan, but with a 10% rate? He told me the offer was firm, but that if I could find something better to bring it in and they’d take a look. It was like price-matching at Walmart and it made things seem even crazier.”

Rein filed complaints with the Office of the Comptroller of the Currency (OCC, May 22), Federal Deposit Insurance Corporation (FDIC, May 22), and the Consumer Protection Financial Bureau (CPFB, May 31). 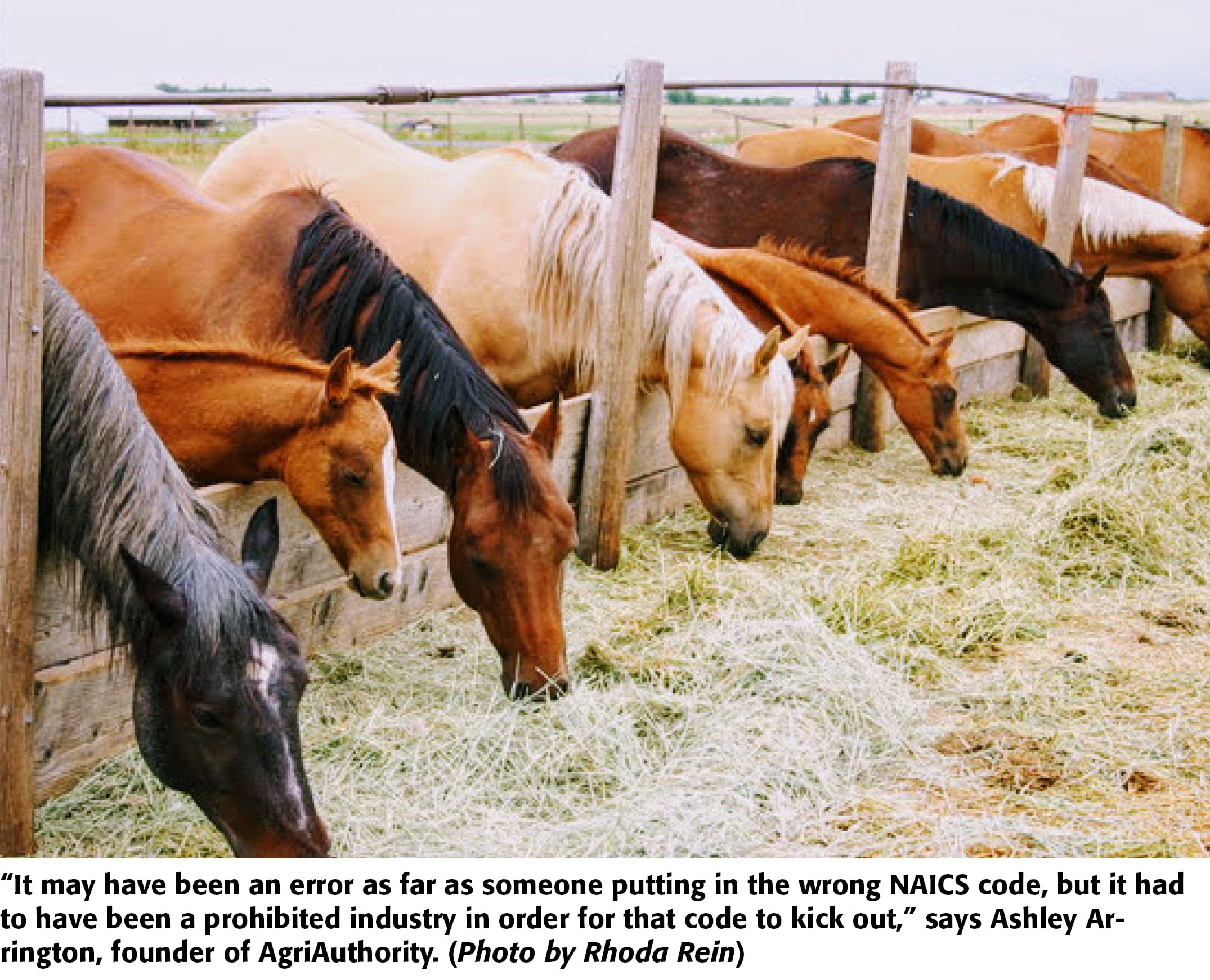 In regard to the OCC filing, U.S. Bank sent Rein another letter on June 6, from Michelle Nickerson, small business lending services, clearly stating the base reason for Rein’s initial loan denial: “Unfortunately, there are some industries that for various reasons U.S. Bank does not provide credit to. Our records confirm when the application was submitted, the industry code used reflected that of horse breeding, which is a prohibited industry under our credit policy.”

However, when asked by Farm Journal about Rein’s loan denial, U.S. Bank officials say the “horse breeding” explanation was in error, and contend uncertainty over how the denial occurred. “It was incorrectly referenced in the letter and our policy does not prohibit horse breeding,” states Cheryl Leamon, U.S. Bank Public Affairs & Communications.

The OCC responded to Rein’s filing on June 6, noting the issues had been “appropriately addressed,” but the OCC was apparently also under the impression that “horse breeding” was prohibited for loan eligibility by U.S. Bank: “The bank confirmed your application was denied on April 21st and the appeal was denied on April 24th because the product was not considered appropriate for their industry per their credit policy. The bank advised when the credit policy was submitted, the industry code used reflected that of horse breeding, which is a prohibited industry under their credit policy.”

The OCC response also mirrors Rein’s assertion that her eventual loan approval was due to involvement with horse training at Darren Miller Stables, and not horse breeding. Essentially, horse training was the parachute enabling Rein to receive loan approval. On May 10, according to the OCC, Venning and Romero appealed the loan application for a second time, providing clarification of Rein’s income stream related to “the exact nature of the business. After review, the industry code (NAICS) was updated to accurately reflect the majority of your business as horse training and the application was approved. The bank apologized for any frustration the matter caused.”

Yet, approval of the loan based on a horse training code carries a heavy dose of irony, because Rein estimates 75% of the horses Darren trains were bred at Darren Miller Stables, and either raised on-site, or raised to training age by clients—creating a heavy amount of commingling between the two income sources of breeding and training. “Changing the NAICS code from breeding to training is a flimsy excuse,” Rein asserts. “Bottom line to me, U.S. Bank officials saw ‘trouble ahead’ and changed the code to make the loan go through.”

In a June 11 letter addressed to Darren Miller, from Lisa Briggs, senior customer care specialist, U.S. Bank responded to Rein’s filing with the CFPB, and cited “several factors” involved in the subsequent loan approval, including proper coding, but did not offer explanation as to first cause: “We were able to confirm, when the request for credit was initially denied, the branch manager, as outlined in your correspondence, escalated the denial to the district manager, who then escalated the application to a small business underwriting manager. Based on several factors, as stated previously to the OCC, including proper coding corresponding to the majority of your business and a strong relationship with the bank; underwriting was able to approve the appeal.”

Clear as mud? How did improper coding set off alarm bells for an activity—horse breeding—that is, and was, according to U.S. Bank, never prohibited from the start? Ashley Arrington believes U.S. Bank’s explanation is incomplete. “It’s just my opinion, but animal reproduction must have been prohibited at some point, otherwise the code wouldn’t have triggered a kick-out.”

U.S. Bank’s correspondence to Rein on May 1 and June 6, moves from the general to the specific, Arrington says. “The May 1 letter states the ‘product was not appropriate for the industry’ and that could potentially make sense for a lot of reasons—but the June 6 letter contradicts that. The June 6 letter gets really specific and says there are some industries that U.S. Bank does not provide credit to, and moves away from the possibility that the wrong product was requested. It’s the June 6 letter that pops out to me because it goes into detail about horse breeding.”

Was the kick-out an error? “It may have been an error as far as someone putting in the wrong NAICS code, but it had to have been a prohibited industry in order for that code to kick out,” Arrington explains. “It sure looks like the NAICS code for horse breeding triggered an auto-kick as a prohibited practice. That is U.S. Bank’s business, but at some point, horse breeding or animal reproduction looks like it was prohibited. It appears U.S. Bank went right back in, put in a code for horse training, and suddenly the approval came through.” 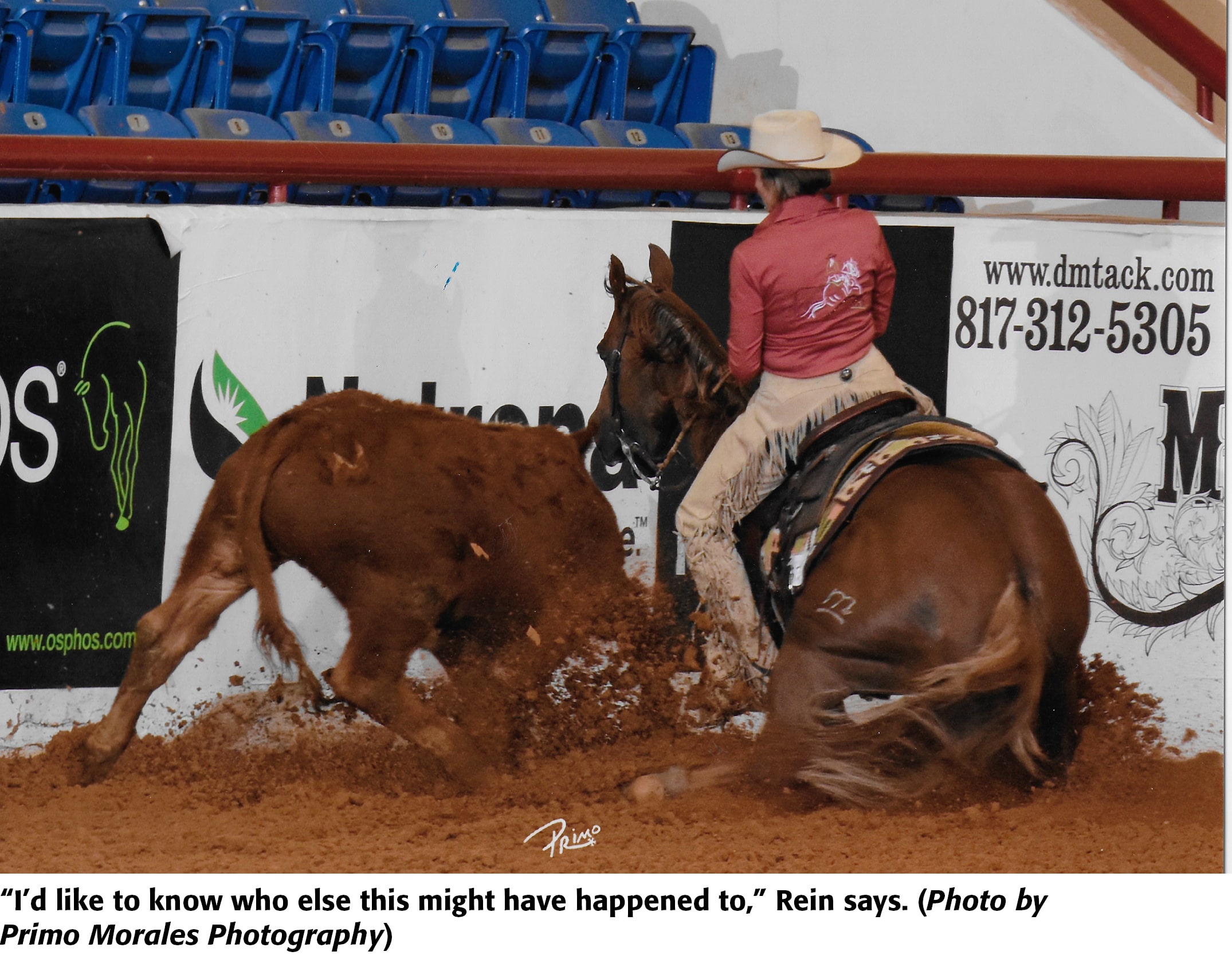 “Involvement in horse breeding doesn’t sound like anything that bankers use to deny loans. I can’t speak for U.S. Bank, but I’ve never heard of anything like this. At the bank I work for, we’re going to run out of customers pretty quick if we’re not involved in animal reproduction. That would be pretty shortsighted on an ag portfolio.”

According to Cortney Cowley, an economist in the Regional Affairs Department of the Federal Reserve Bank of Kansas City, new farm operating loan denials have dipped a bit in the Tenth District: Colorado, Kansas, the western third of Missouri, Nebraska, the northern half of New Mexico, Oklahoma, and Wyoming. The Tenth District Ag Credit Survey collated data from approximately 200 lenders, and asked how many agriculture loans in the first quarter of 2019 were denied due to customer cash flow shortages. “For 2019, the average rate of denial was 7.5%, and specifically, the mountain states (Colorado) were at 6.6%—down from a high of just over 8% in 2018,” Cowley explains. “We know the percent of loans denied specifically due to cash flow shortages, but we don’t have or know the number of denials based on bank policy.”