After the Fire: Cattle Slaughter and Beef Prices

Cattle and beef markets continue to recover from the disruptions resulting from the Tyson packing plant fire in Finney County, Kansas on August 9.  Data is slowly becoming available to provide more clarity to the aftermath of the fire and, in some cases, clear up some initial misperceptions.  Lots of scrutiny and suspicions are being directed at cattle and beef markets.

Actual slaughter data is available from the Agricultural Marketing Service with a two week lag.  Thus, on August 29, data became available to compare the pre- and post-fire impact on cattle slaughter.  Table 1 shows the actual daily steer and heifer slaughter for the week before and after the fire.  Monday through Friday slaughter following the fire was down 22,158 head, 4.6 percent lower than the week before the fire.  This reduction is close to the estimated capacity of the closed plant.  However, by Saturday the industry was able to increase steer and heifer slaughter by 21,156 head compared to the previous week.  This resulted in a net slaughter decrease of 1,002 head the week after the fire.

*Reflects impact of fire overnight on August 9; Saturday slaughter on August 3 was 28330 head.

The reduction in beef production resulting from the fire provoked a sharp response in cash prices for boxed beef with varied responses for the different beef primals.  Table 2 shows the price levels the day of the fire (the fire occurred after business hours) and the percent change in prices since that time.  All percent changes in Table 2 are daily negotiated prices compared to values on August 9.  The Choice cutout peaked on August 20 and 21, up 11.7 percent from August 9 levels. Cutout values have since decreased and are up 7.1 percent on August 30 compared to August 9.

End meats are sustaining higher levels since the fire.  Chuck values peaked at 13.5 percent higher on August 22 and are still 9.6 percent higher on August 30.  Round values have maintained sharply higher levels with the August 30 value the highest so far, up 14.5 percent from pre-fire levels.  These patterns of value changes confirm the complexity of beef wholesale and retail markets and the product market contortions that have occurred as a result of the fire. 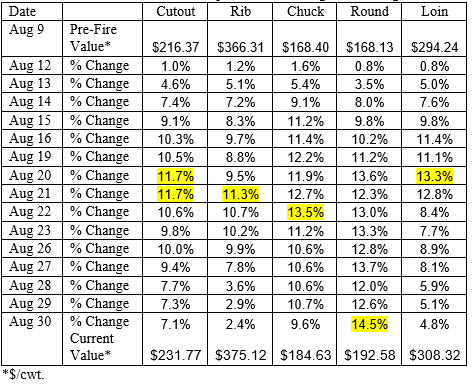