Across a clear sheet of frozen water, and against a cutting wind, Robbie Polk and three companions walked toward a meeting with a giant. Layered in camo, shotgun over his shoulder, and headlamp angled downward to pierce early morning hours still draped in black, Polk stumbled as his light beam illuminated a stunning sight and the bitterly cold air exploded with exclamations of disbelief. Polk was staring at a dinosaur beneath the ice.

Farmland and its surrounding environs hold all manner of secrets, but on a harsh January day in 2018, when Polk and three hunting buddies chanced upon a gargantuan alligator snapping turtle suspended just below the ice, the foursome witnessed a rarely seen mode of survival. Taking the once-in-a-lifetime encounter beyond all reasonable expectations, the group found a second alligator snapping turtle in close proximity, also located just below the ice. A morning that began with brutal weather and ended with no ducks became the most unusual hunt of Polk’s life.

Polk, 34, grows corn, cotton and soybeans in Phillips County, roughly 10 miles south of Marvell, in southeast Arkansas. During winter, he duck hunts three to four times a week in the heart of the Mississippi Flyway, and for the past 15 years, Polk has established a time-honored tradition of hunting several times during the season with college buddies Jonathan Evins and Hayes Anthony (Eldorado), and brother-in-law Trey Whitley (Little Rock). 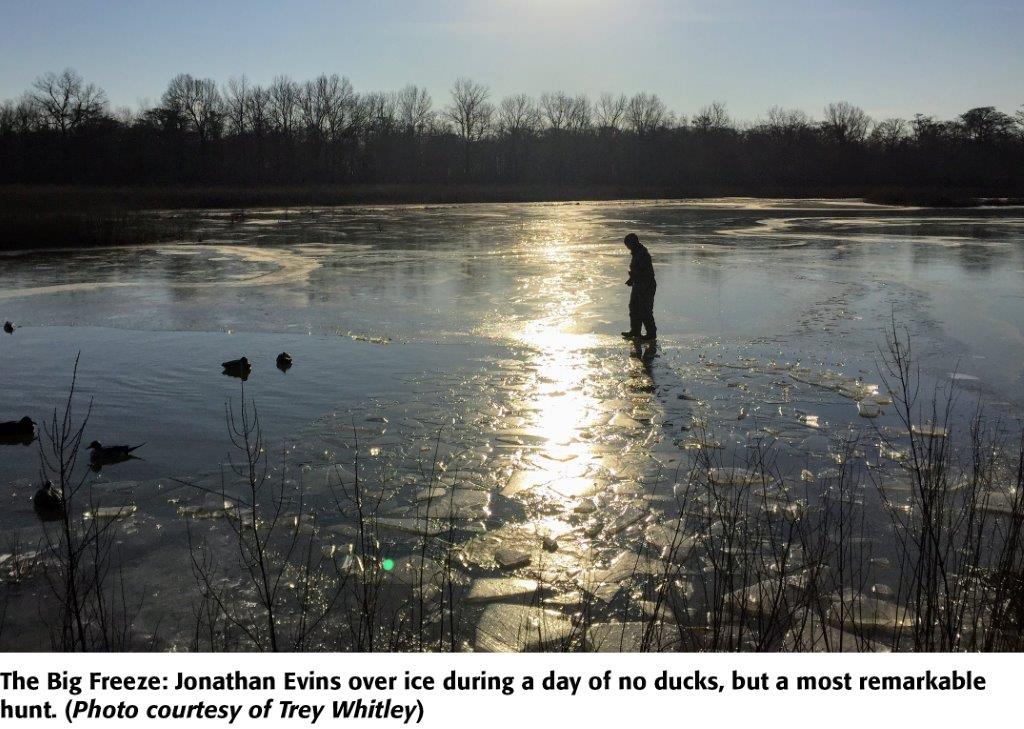 On Jan. 13, 2018, the quartet readied for a hunt on 15 acres of flooded ground (pumped by Polk) within a larger 120-acre field, on a piece of Polk’s farmland off Maddox Bay, roughly 25 miles southwest of Marvell. Arriving an hour before daylight, Polk eased a side-by-side off his truck trailer, unloaded Anthony’s black lab, Kane, and the group set off for the hole. Even for seasoned outdoorsmen, the conditions were ripe for a poor hunt: “Seems like it was about 13 degrees that day, before a wind chill in the single digits,” Polk recalls. “Maddox Bay was freezing over, something the old-timers hadn’t even seen, but our wives locked us into a baby shower in the evening, and this was the only chance to hunt.”

Parking the side-by-side at field’s edge, Polk grabbed his gear, along with a left-handed, Benelli Super Black Eagle 12 gauge, and the group set out on foot, crunching across frozen farmland, only to find the 15-acre hole locked tightly in ice. Polk switched gears, and headed to an adjacent private lake—dubbed the goose pond—with average depths of 7’-8’, another prime spot to hunt, hoping the waters might be relatively clear. However, to access the goose pond, the foursome had to cross a low-lying wooded stretch with water typically at knee to thigh level. 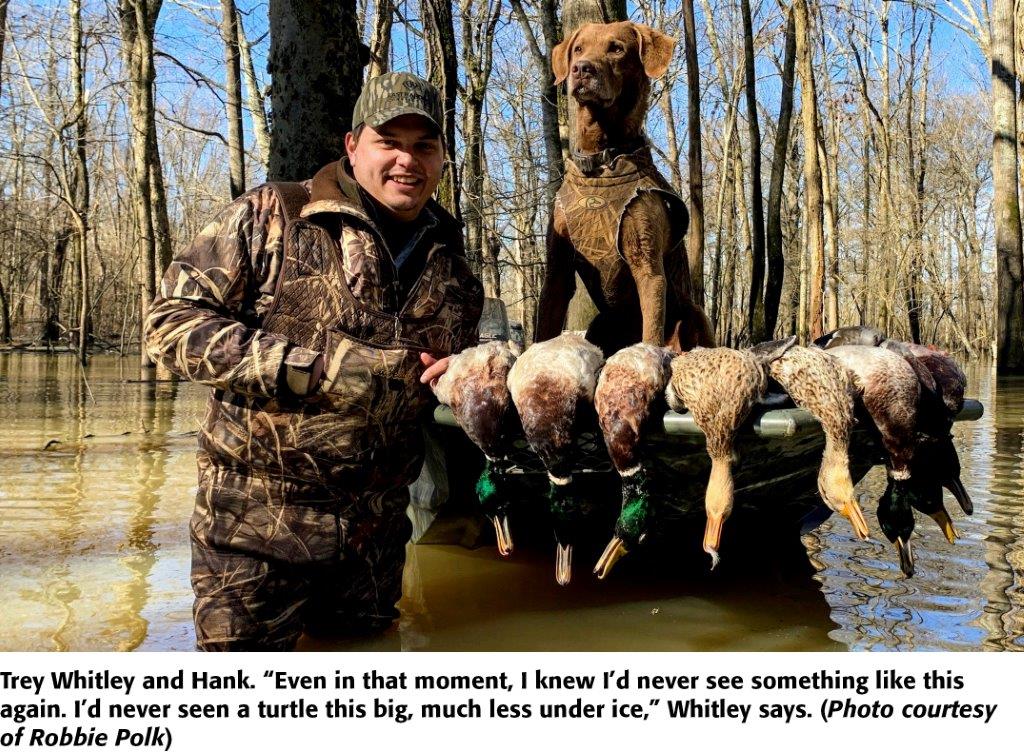 Crossing the sunken woods, Polk and company reached the goose pond’s edge, only to find heavy ice, and even where the ice thinned at greater depth and could be broken, the water was too deep for a standing hunt. In short, the goose pond was a no-go, and the band of four reversed course into the wooded buffer, back to the farm hole.

Navigating on ice, headlamp and flashlight bobbing between trees and stumps, Polk heard voices break through the darkness, and moved toward the sounds, finding Evins, Hayes and Whitley standing atop leviathan—an alligator snapping turtle submerged below approximately 2” of ice, distinctive by three ridges atop an algae-covered shell and a hooked beak. Polk was shocked by the sheer size: “It was unbelievable. We trotline on the goose pond and catch snapping turtles, but nothing this size. The diameter of the shell was about bigger than a truck tire and the head size was very close to a human’s. I’ve caught some big ones, but you couldn’t manhandle this one and you wouldn’t want to.” 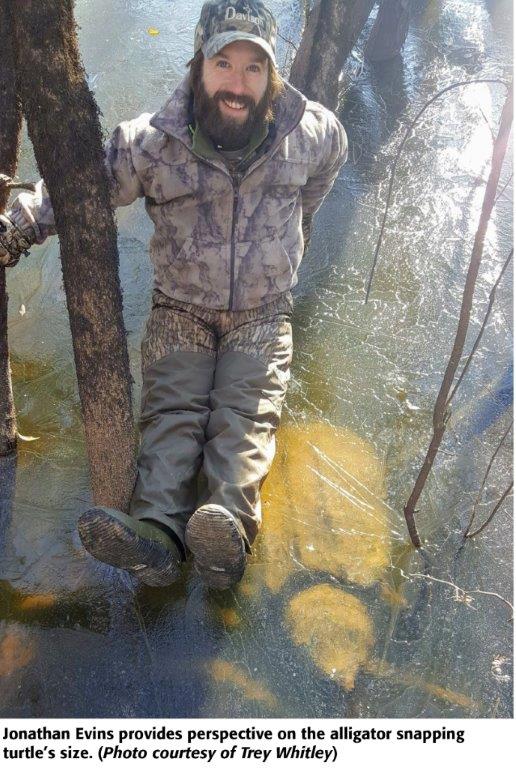 Whitley concurs: “I think Jonathan saw it first, and he yelled, ‘Check this out.’ I was completely amazed to see this giant turtle about 1’ under the ice, which was a couple of inches thick. Tail to nose, I’d say it was 4’-5’ in size, with a head that was easily the size of an adolescent human. This was like something you’d think would be in a museum. Even in that moment, I knew I’d never see something like this again. I’d never seen a turtle this big, much less under ice.”

However, just minutes later, the quartet made a second highly unlikely discovery. Incredibly, 20 yards to the south of the giant turtle, they walked over a second alligator snapping turtle in the ice. “This one was less than half the size of the big one, and we could make out the barest movement. They were both moving—just in the tiniest motion—but you just see they were very much alive,” Whitley details.

“Just a hair,” Polk echoes. “You could see head movement if you watched close.”

After snapping a few smartphone pictures as the shooting hour quickly approached, the quartet continued on for the farm hole, broke ice into massive chunks that were hardly inviting to waterfowl, dropped in a half-dozen decoys, and hunkered down for misery—particularly for Polk. “I was coming off a week of flu, and then fell in while we were breaking ice, and got water all in my waders. I took off some of the wet clothes, borrowed clothes, curled up in the blind, and froze my tail off while everybody else hunted.” 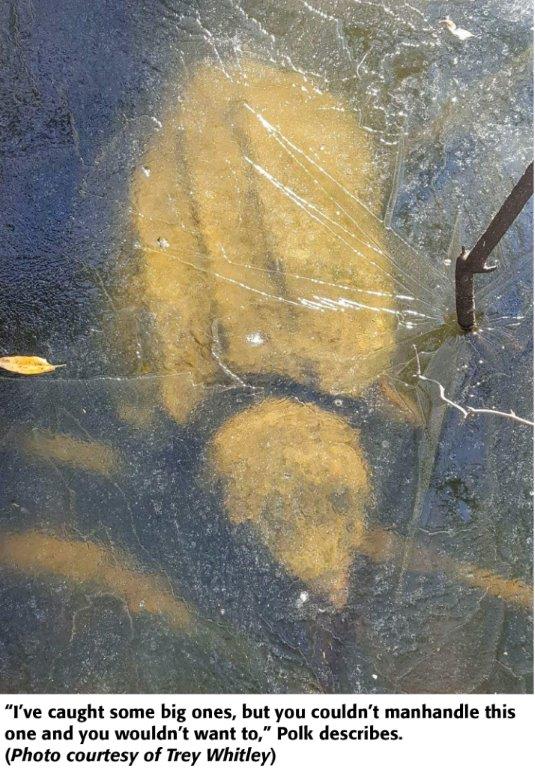 By 10 a.m., after a continuous chain of breaking ice every 30 minutes, the quartet packed up and walked back to the turtles for a few final pictures in daylight, and then headed for the side-by-side, leaving the two reptiles to nature. Despite no ducks killed, the hunt left a lifetime impression on the foursome. They’ve hunted the ground a dozen times since, walking and standing in the same water for hours, chasing ducks and dogs, always recalling the frozen day of the massive turtle.  “Whenever we’re out hunting beside that strip of woods,” Polk describes, “and someone feels a bump on their leg, we say, ‘Oh, it’s that turtle again.’”

Even prior to seeing the two turtles below the ice, Polk carried heavy respect for alligator snapping turtles: “We don’t intentionally catch these guys when we trotline for catfish, and we do whatever is necessary to make sure they’re not injured when we release them from the line. Basically, we do whatever we can to protect them.”

Whatever the giant turtle’s age, Polk knows it long preceded him beside farmland: “I don’t know how old it was or if it was a record—I just know what we saw. That turtle has been here a long, long time, and knows how to survive.” 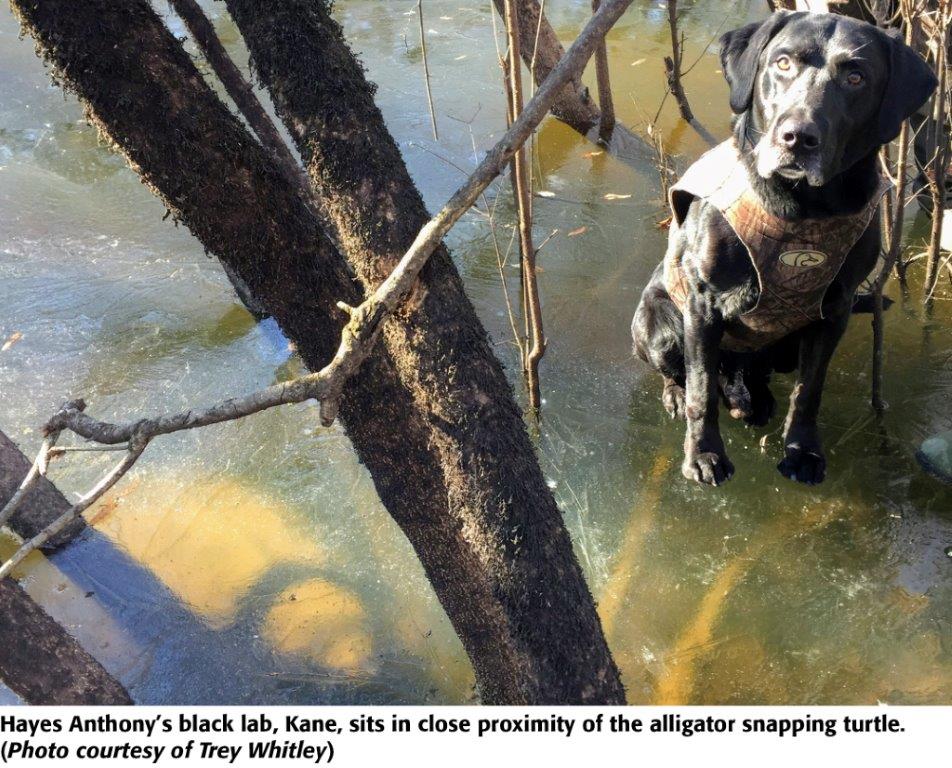 “Seeing the turtle has given me a greater appreciation for the parts of God’s creation that we don’t notice around us. Animals have their own world and you don’t think about it when you’re hunting in the woods. You don’t think about what all goes on all day and all night when you’re not around. That turtle in the ice was a privilege to see and it’s just a little window to all the unknown things that go on in the wild.”

Rat Hunting with the Dogs of War, Farming's Greatest Show on Legs