According to the National Drought Monitor, 42.04% of the contiguous U.S. is drought-free, which is an improvement from 37.06% last week. But that means 57.96% -- a majority -- of the country is still covered by some form of drought and that drought is centered over the country's breadbasket.

The monitor notes: "The storm system that brought beneficial moisture to parts of the central Plains and western Corn Belt last week slowly trekked eastward. It dropped widespread moderate to heavy precipitation (more than 2 inches) on the remainder of the Corn Belt and Great Lakes region, and on the Delta, Tennessee Valley, southern Appalachians, and South. Heavy snows also blanketed portions of the northern Plains. Later in the period, a new storm system produced light to moderate precipitation in the Pacific Northwest, northern and central Rockies, and northern Plains. Unfortunately, little or no precipitation was observed in California and the Southwest, Intermountain West, southern and central High Plains, and portions of the southern and middle Atlantic Coast States... Temperatures averaged above-normal in the Southwest, Southeast, and mid-Atlantic, where highs topped 90 degrees F in the latter region early in the period. In contrast, subnormal readings prevailed across the Northwest, Rockies, Plains, upper Midwest, Great Lakes region, northern New England, and Alaska. It was up to 20 degrees F below normal in the Black Hills of South Dakota and in interior Alaska."

For the Plains, the monitor notes west Texas northward into eastern Colorado-western Kansas and southwestern Nebraska saw little to no beneficial rains. "As a result, some deterioration occurred in northern and southern Texas, with extreme southern Texas nearly all in D4. Elsewhere, weekly totals of 1 to 2 inches were common from eastern Oklahoma northward into North Dakota, with many northern locations receiving heavy snows," it notes. 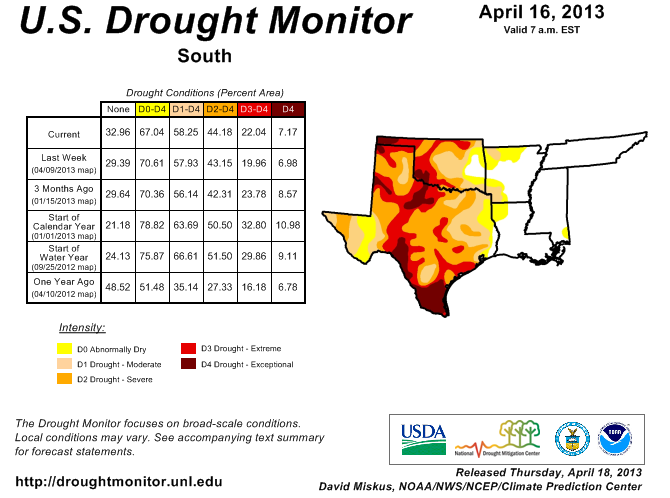 "In Rapid City, SD, the April 8-10 snow total was 28.2 inches, with Bismarck, ND, receiving 17.3 inches on April 14, an all-time 24-hour record. Many other locations in southeastern Wyoming, western Nebraska, and the western Dakotas measured 6 to 12 inches of snow. Some small one category improvements were made in parts of eastern Oklahoma, in eastern Kansas, in extreme eastern Nebraska and its Panhandle, and throughout most of the Dakota where few or no changes were made last week. In Kansas, although 1 to 1.5 inches fell, most of it on Tuesday, many areas have not seen runoff or surface water recharge. One producer in Saline County reported no runoff from a 1 inch event that fell in 1 hour. Farther north, another 1.5 to 2 inches of rain allowed for a small one category reduction (D3 to D2) in extreme eastern Nebraska, while 0.75 to 2 inches in western Nebraska and eastern Wyoming over the past 2 weeks improved conditions from D4 to D3," adds the monitor. "The rest of Nebraska remained status-quo, with totals generally between 0.5 to 1.5 inches (but lower in the southwest). In the Dakotas, after minimal or no changes last week due to the 12 GMT Tuesday precipitation cutoff, widespread decent precipitation (1 to 2.5 inches) resulted in a general one category improvement across both North and South Dakota. In North Dakota, although much of the state is snow covered, the State Climatologist Adnan Akyuz reported that there has been significant infiltration into top layers of the soil; extensive snow cover and its water equivalency will further improve soil moisture into deeper layers; above freezing daytime and below freezing nighttime temperatures are causing slow melt and infiltration rather than surface runoff; no shortages in the river systems; and the Red River of the North is expected to reach major flood stage in most locations along the river from Richland (in south) to Pembina (in north) Counties."

For the Midwest, the monitor notes that heavy, widespread precipitation soaked much of the Midwest, with most locations from southern Minnesota, central Wisconsin and lower Michigan southward all the way to the Gulf Coast measuring at least 2 inches. "Parts of northeastern Iowa and southwestern Wisconsin were particularly drenched (4 to 6 inches of rain), as well as central lower Michigan. After last week’s decent precipitation, soils finally thawing in southern portions of the upper Midwest (southern Minnesota and Wisconsin), and no drought changes previously made in most parts of the upper Midwest due to the frozen soils, a broad one category improvement was implemented for most areas in Minnesota, Iowa, Wisconsin, and Missouri. Where year-to-date precipitation was 3 to 4 times normal, a two category reduction was justified in northeastern Iowa, southeastern Minnesota, and southwestern Wisconsin (D1 to none). In Iowa, the State Climatologist Harry Hillaker noted that this was the wettest week in terms of statewide average precipitation since June 2010 (2.90 inches, normal is 0.78)," it states. "Not surprisingly, many daily and 7-day average USGS stream flows are in the upper 90th percentile, with numerous streams and river flooding. In Minnesota, State Climatologist Greg Spoden stated that the southern one half of the state was nearly completely free of subsoil frost, but the northern half remains blanketed by a significant snow cover, with roughly the first six inches now thawed. Similar conditions existed in Wisconsin. A few areas, however, stayed status-quo in extreme northwestern and northeastern Minnesota as year-to-date precipitation was not as great as surrounding areas. As of April 14, USDA/NASS topsoil moisture rated short or very short had dropped to 26, 22, 9, 5, 4, 3, 2, and 0 percent in Iowa, Minnesota, Wisconsin, Illinois, Indiana, Missouri, Ohio, and Michigan, respectively." 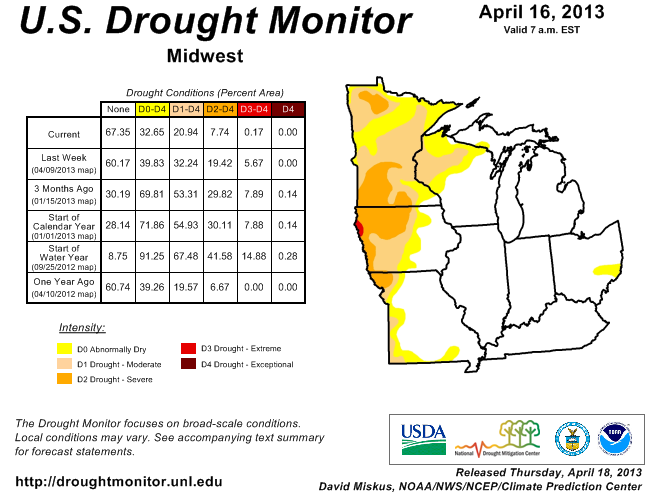 More rain on the way
In its outlook, the monitor says the forecast for April 18-22 are expected to be very wet in the middle of the country, with a swath of 3 inches of precipitation expected from Oklahoma northeastward into Michigan. "Much of the eastern half of the nation should receive decent precipitation, with parts of the pacific Northwest, northern Rockies, and central Rockies and Plains expecting moderate totals. Unfortunately, dry weather is forecast for most of the Southwest and extreme southern Plains. Subnormal 5-day average temperatures are predicted for the middle of the U.S., especially the North-Central States. Near to somewhat below-normal readings are expected elsewhere, except in California and southern Florida where temperatures should average above-normal," it states.