The cash market for fed cattle last week gave some relief to feeders and overall market sentiment in the wake of the prior week’s $5/cwt. decline. Trade in the Iowa/Minnesota reporting region came in at $110-$111/cwt. at the top of the market, while Nebraska cattle traded between $107-$109/cwt. The Texas, Oklahoma and New Mexico report for Friday featured just 2,417 head traded live at the $106/cwt. average.

The pace of fed cattle harvest in the wake of the shutdown of the Tyson – Holcomb, KS packing plant appears to be the silver lining in what is otherwise a tenuous time in the cattle and beef markets. Tyson and other packers have stepped up to absorb much of the slack with an estimated 521,000 and 523,000 head fed cattle harvest rates in the past two weeks.

Market unrest has pushed spot carcass cutout values to record August highs coinciding with the $5/cwt. decline in cattle prices two weeks ago. Industry estimates peg last week’s packer margins north of $450/head as a result, spurring plant production from all firms. Whether or not this level of weekly harvest pace can be maintained through the fall is key to market currentness.

The Cattle on Feed Report released last Friday favored a current fed cattle supply, showing a July marketing rate up 6.9% over a year ago while the August 1st cattle on-feed number was 100.2% of a year ago.

The latest weekly average CAB®  carcass cutout value at $244/cwt. was up 10.4% for a two-week timeframe. Loin cuts drove the action the hardest last week with 0x1 strips and short loins rocketing up to wholesale values of $7.70/lb. and $7.33/lb., respectively, which is well outside of the normally subdued August trend.  The rib value increase pulled up in a strong second with a wholesale value of $9.05/lb., adding to the rib cutout inflation previously seen. The current rib price matches last year’s 4th quarter high, put in more characteristically just ahead of the holidays.

The ends of the carcass were not to be outdone as round cuts saw strong demand along with chuck rolls and shoulder clods. The summation is that most all subprimal cuts on the weekly report are posting higher values.

Look for cutout prices to drop readily at the conclusion of the holiday, adjusting more appropriately to seasonality and some allayed overreaction from the buying side of the trade.

Given all that has transpired this August in the beef markets, one can easily miss the affirmative message being sent through the pipeline about high-quality beef. Those that are out of touch with the weekly, monthly or annual trends transpiring in the end-product side of the business are likely to be surprised at the current carcass value realities.

Price volatility in a time of supply disruption provides insight as to where the voids most quickly appear. This is now on display as the Choice/Select spread last week touched north of $25/cwt. The CAB® cutout moved to $12.64/cwt. over Choice while the Prime cutout is off the charts at $50/cwt. premium to Choice. 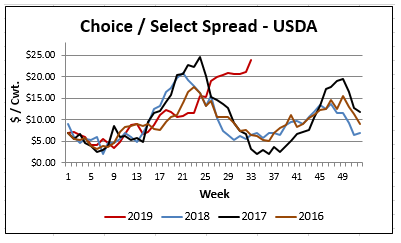 The atypical late-summer quality spreads were out of the gate prior to the Tyson plant being shuttered two weeks ago. Middle-meat demand, specifically for Choice and higher grade ribs, had already proven itself unsatisfied in July. This, combined with the fact that the national average July Choice grade slipped just 1 percentage point below a year ago, boosted the Choice/Select spread.

The rest of the story is that the modern beef market simply demands a larger portion of Choice, Prime and CAB carcasses.  Ten years ago the July supply of Choice and Prime carcasses was growing but still at just 61% of fed cattle carcasses with 20.5% of eligible carcasses qualified for CAB.  The Choice/Select spread at that time was just $5.85/cwt.  A decade later this past July the market featured a 78% Choice and Prime mix with 33.7% CAB-accepted carcasses.  Still, demand forced a $20/cwt. Choice/Select spread during a period of what can only be called, in historical context, quite ample availability of Choice, Prime and CAB® product. Once again, all of this without factoring the recent August supply disruption. 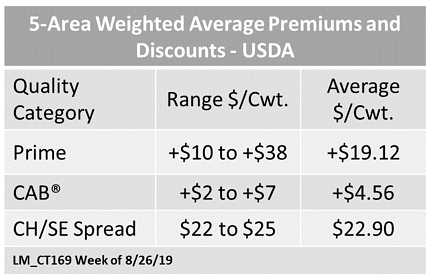 A decade ago, market participants would have been hard pressed to predict the market demand for high-quality beef under current levels of highly marbled beef product.

Granted, the price spreads noted above are abnormally large this late in the summer, but demand is demand even considering a small decline in supply tonnage. Marketers of quality carcass-oriented cattle, while facing a less than exciting fed cattle price today, are also looking at a market opportunity on many packer grids that will help to shore up the narrower cash price margins facing us today.

Packer grid premiums for CAB® carcasses this week will average $97/ head over weighted average cash prices at an 850-lb. hot carcass weight. This, figured with a plant average 70% Choice base leaving 30% of the Choice/Select spread paid to every Choice carcass ($6.87/cwt. net) plus an added $4.56/cwt. USDA-reported CAB premium. Even though near-term reductions in the quality spreads are all but inevitable, this is very good news for feeders with cattle that fit the marbling incentives today.

Fed cattle carcass weights this year have been reduced for two reasons. The first cause was the lasting impact of horrible feeding conditions through the winter and spring. Second, the pace of fed cattle harvest has been brisk, keeping front end cattle supplies current and weights consequently low. It’s also likely that the former phenomenon fueled the latter as feeders late this spring took advantage of a positive basis and marketed cattle ahead of projected optimum finished weights.

Heifers have also been featured more prominently in the fed cattle harvest this year at 37% of the fed cattle numbers, a continuation of the two-year trend of stronger heifer head counts compared to their steer counterparts. Year to date, steer carcass weights are down 5 lb. while heifer weights are down 5.6 lb. Heifer carcasses have been more erratic than steers as compared to a year ago with departures as low as 15 lb. below and as much as 10 lb. above a year ago. 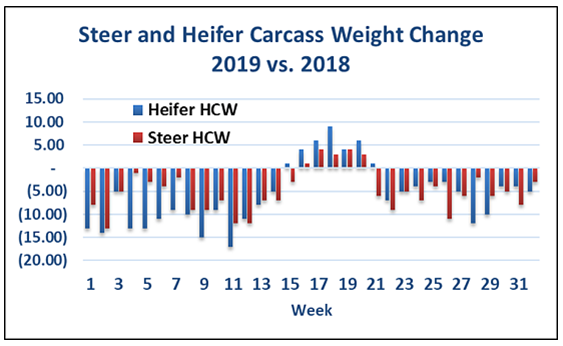 The larger heifer numbers may have normally generated a bit richer marbling and quality grade this year had carcass weights not been lighter. All in all, it appears that effects of the winter are lasting well into the final phase of the spring-born calf fed cattle supply. This has shown up in the aforementioned small decline in Choice quality grade carcasses, compounded some by lighter weights creating overall smaller Choice tonnage.