New Silage Research: Genetics or Weather- Which Has More Influence? 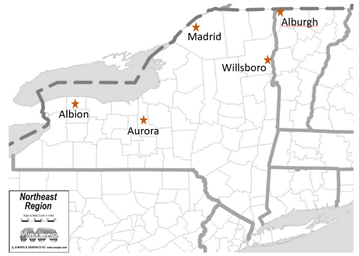 Cornell University offers a corn silage hybrid evaluation program with four locations in New York and one location in Vermont, in collaboration with the University of Vermont, and uses the same field protocols to bring uniformity to the plots. With 70 to 80 hybrids entered each year, each hybrid is planted at two locations in New York and at the location in Vermont.

“If you’re curious about a certain hybrid, you can look at how it did across three different locations and see if it consistently performed well at all three locations or if it performed really well at one location under a certain weather condition or soil type,” said Joe Lawrence, Cornell University Dairy Forage Systems Specialist.

The parameters used for corn silage quality include a newer indicator – undigested neutral detergent fiber (uNDF240). uNDF is the part of the fiber that is not able to be digested in the rumen fluid at a certain time point. The cow needs a certain amount of fiber mat in her rumen, but the amount requires balance. If there’s too much, she fills up with material that’s not digestible, so she can’t eat as much. If there’s too little fiber mat, it doesn’t act as a buffer and she’ll get an upset stomach. The uNDF240 is a good predictor of dry matter intake, and a good number to consider when picking hybrids in context to how it fits the feeding program.

“It’s helpful to look at all of the indicators and whole plot averages and use weather data to understand how a specific location compares to a producer’s farm in terms of rainfall and heat,” Lawrence noted. “It gives a better sense of what a good performing hybrid was for that season, then they are calibrated to the growing season instead of just picking an arbitrary digestibility or starch content value.”

Lawrence’s study used a subset of four hybrids that were planted across eight locations, from central Pennsylvania (in collaboration with the Professional Dairy Managers of Pennsylvania and Pennsylvania State University) to New York and up to Vermont, with the same genetics planted across a significant stretch of the Northeast. This provided variation in soil type, growing degree days and weather. 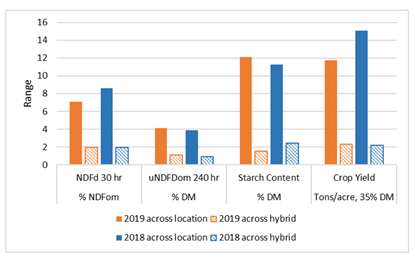 When averaging values across the hybrids but separated by location, there is significant variability. For example, the 30-hour digestibility shows a 7.1% swing across locations, but when comparing different hybrids at the same location, there was only a 2% difference.

“In this study, the location growing conditions explain a lot more of the variability than the hybrid does,” Lawrence noted.
“It’s a bit ironic because we spend a lot of time selecting hybrids, but this suggests that in any given growing climate, the range between two different hybrids (excluding unique genetics such as BMR) isn’t that great, but the range between growing those same hybrids in different growing conditions is much more significant.”

What influences the crop?

•    Soil Type
Another study by Dairy One, a forage lab, found statistically significant differences in digestibility across soil type. They found that heavier soils with poor drainage had lower digestibility.

“We tried to dig into that further. Our study found that there is a trend toward this; however, it’s not always distinctly significant and tends to have an interaction with rainfall,” Lawrence explained.

•    Longer-Season vs. Short-Season Hybrids
For many years, the industry has talked about pushing the window for longer-season hybrids in order to get higher yields. Retired Cornell University Emeritus Professor Bill Cox conducted a multiyear trial that showed if you can grow a five-day-longer hybrid and still reach 35% whole plant dry matter, there’s a potential to pick up an extra half a ton per acre. 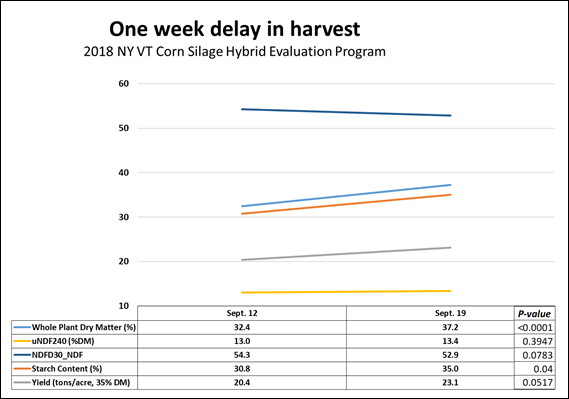 But what happens if you get an early frost or there’s a rainy spell coming and you need to chop that corn a few days early? Using a subset of data from the hybrid trial with four hybrids planted on the same exact day but harvested one week apart, Lawrence was able to answer that question.

“By waiting a week and allowing the plant to mature gains more yield and a higher-quality silage compared to where you’d have been a week sooner,” he said. “Therefore, if we pick a slightly shorter-season hybrid, we have a better opportunity for it to reach 35% dry matter and optimize starch content and yield. However, if we pick the longer-season hybrid and gamble a little bit in the hopes of getting more yield, but weather conditions force us to harvest earlier than desired, we end up with numbers that we aren’t as happy with.”

By choosing a slightly shorter-season hybrid that can consistently reach the desired maturity for silage (35% dry matter) at your location, the benefits to yield and starch content far outweigh the potential benefits of trying to get more yield out of a longer-season hybrid, according to Lawrence. Additionally, since corn is essentially an over-mature grass, we do not see a large impact on fiber digestibility as we would with a delayed harvest of a grass hay crop.

“I’ve recently seen data from the Northeast showing that over the last 50 years, on average, we’re getting an extra 5 inches of annual precipitation, and about 70% to 80% of that extra 5 inches is coming in the fall of the year,” Lawrence noted. “A little-shorter-season hybrid gives the producer more management control over harvest timing in the fall versus having the weather dictate everything you do. Seed companies have done a nice job developing short-season hybrids that are competitive and stronger, so I don’t feel like you're giving anything up.”

Drovers
In Selecting Silage Hybrids, It’s Best to Test
Which Type of Silage Hybrid Is Best for You?
Hitting the Sweet Spot: When to Harvest Corn Silage

Diet Deep Dive: Will Starch be in Short Supply?

Harvest Is Exhausting, Know How to Stay Safe Behind the Wheel