The value of seeding alfalfa into corn silage might not be obvious, but John Grabber, a research agronomist with USDA’s Agricultural Research Service, says this system is designed to solve several shortcomings with corn silage and alfalfa rotations.

“Corn silage and alfalfa are often grown together in rotations to provide forage for livestock, but one of the reasons why farmers are growing less alfalfa is that it has relatively low forage yields compared to corn silage,” said Grabber. “Corn silage can produce maybe 9 tons of dry matter per acre off of a field. By comparison, once it’s well established, alfalfa might give you 5 tons of dry matter per acre.”

The problem with low alfalfa yield is especially pronounced during the seeding year. Many producers will plant alfalfa in the spring after they’re done growing corn or other crops for a couple of years, but spring-seeded alfalfa needs much of the season just to get established before you can get a harvest.

A major problem with corn silage is that little or no ground cover is left after harvest. Once manure is spread, it becomes the perfect recipe for runoff of soil and nutrients.

“We’ve got nutrients that are getting into waterways, like nitrogen and phosphorus,” he said. “Letting our waterways become polluted is a real concern, and you’re losing soil, which means you’re losing your future crop production.”

In the interseeding system, corn and alfalfa are planted at about the same time. Once the corn is harvested, the aim is to have a good stand of alfalfa to provide ground cover in the fall and winter, and to quickly bring alfalfa into full production the following spring.

1.    Select a site that is well suited for alfalfa producti 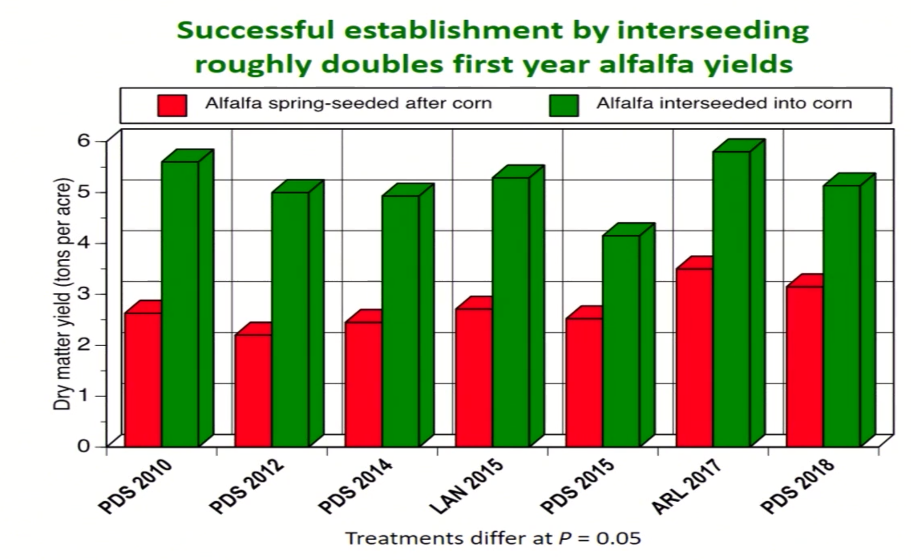 on.
2.    Interseed alfalfa soon after corn is planted. Make sure the seedbed is firm and alfalfa is planted at the proper depth.
3.    Apply “plant protection” products such as prohexadione, fungicide and insecticide on alfalfa seedlings to promote its establishment under corn.
4.    Interseed alfalfa varieties that are well adapted for growth under corn. Glyphosate-resistant or conventional alfalfa varieties can be used, but in the latter case, the site must have a good history of weed control, especially of summer annual grasses, because current herbicide options for corn and interseeded alfalfa are best suited for broadleaf weed control.

But if a successful establishment of alfalfa under corn for silage can be achieved, Grabber’s research shows alfalfa yields doubled in the first year of production compared to spring-seeded alfalfa. 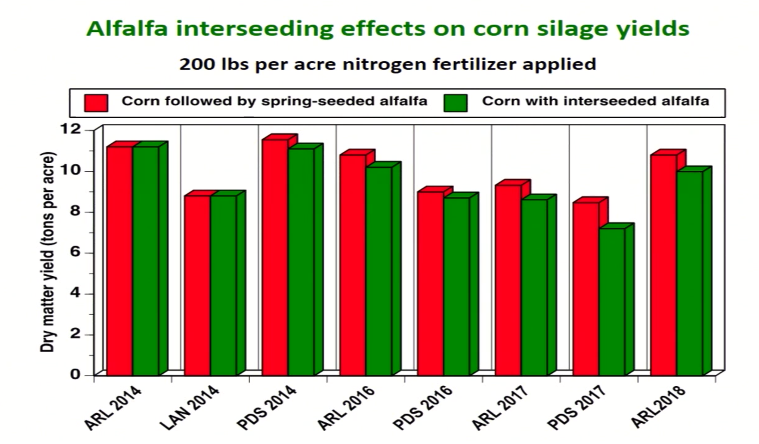 “We’ve observed interseeded alfalfa can cause up to a four-day delay in corn development, and so farmers must monitor whole corn dry matter to harvest at the proper moisture and to maximize corn silage yield,” Grabber explained.
Another factor that’s involved is the timing of corn and alfalfa planting. If you plant corn early in the season, Grabber finds there can be a yield drag with interseeded alfalfa.

“Early in the spring, it’s cool and the corn has a hard time getting started, but those are great conditions for alfalfa,” he noted. “So the alfalfa tends to be quite competitive with corn and that competition may cause a reduction in the corn yield.”

Later-planted corn is more competitive with alfalfa and may be less susceptible to yield loss. Ongoing studies will aim to refine planting and harvest management to help ensure interseeded alfalfa can be successfully established while minimizing effects on corn silage yields.

Another factor is fertilizer management of corn. Interseeded alfalfa competes with corn for nitrogen and other soil nutrients, so it’s important to apply enough nitrogen on the crops to maximize the yield of corn interseeded with alfalfa. Grabber and colleagues are conducting further work to improve fertilizer management for this system. To maximize the reliability and profitability of the interseeding system, they are also aiming to refine the timing and rates for applying plant protection products on alfalfa and to identify hybrid characteristics that will help to ensure the system produces high yields of corn silage.

Grabber’s presentation was part of the 2019 World Dairy Expo World Forage Analysis Superbowl. You can view the full presentation here.

Which Numbers on a Forage Analysis Are the Most Important?

Be Safe and Smart Around Silage

Take a Better Silage Sample with These 5 Tips