There is very little insight needed to understand what happened in the cash markets last week. Seasonality and the conclusion of the Labor Day holiday were easy indicators that the market would be weaker in both the live cattle and boxed beef segments.

Fed cattle prices took a significant hit last week, devalued by a little more than $3/cwt. below the week prior in the live market. Texas fed cattle continue to trade at the lower end of the range due to the region’s larger supplies with the negotiated cash trade on a paltry 3,472 head averaging $100/cwt. The Iowa/Minnesota trade region saw a weekly top of $107/cwt. and a live average of $104/cwt. and $166/cwt. dressed. 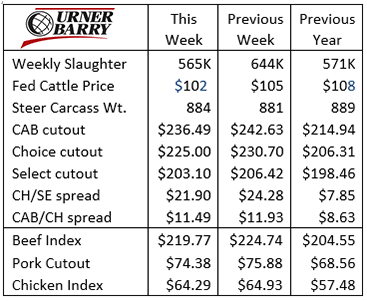 It’s difficult for the marketplace to identify what cattle should be worth at this particular point in time given the magnitude of spread between cattle and boxed beef values. Cattle feeders are eager to keep cattle moving toward the packer as they’ve been able to harvest some basis on futures positions for the time being. The latter hasn’t strengthened the feeder’s resolve to stand firm for cash price gains.

It’s fully within reason that cutout values posted major pull-backs last week as current price levels are unsustainable and a carryover from the emotional supply shock we saw during August. The weekly average CAB cutout price was down $6.11/cwt. with Choice down $5.70/cwt. and Select $3.32/cwt. lower. Price spreads between the quality grades and CAB vs. Choice narrowed slightly on the week.  However, the Choice/Select spread remains record-large for this time of year so a nominal decline in the Choice premium (Select discount) is marginalized when reviewed in historical context. The CAB/Choice spread is not record large but near the top of the historical range for this time of year, currently at $11.49/cwt.

Evaluating the CAB subprimal carcass report shows that rib and loin items are currently declining in price the fastest, just as they had abruptly increased in price in August. End meats are holding their elevated price points much stronger amid the total carcass devaluation that occurred last week.

The big picture for carcass values and the beef complex is that shifting prices lower would be good for buying demand and assisting in moving volume this fall. Processing capacity is a factor in terms of volume but has proven not to be insurmountable.

Approaching the middle of September the beef market is in a seasonal transition.  Many features of the current marketplace are outside of normal, to be certain, but a pullback in live cattle and boxed beef prices is fairly normal for September in recent years. As a matter of fact, September 2018 posted the year’s lowest monthly cutout price while September 2016 and 2017 featured the 3rd lowest monthly cutouts.

September features grilling weather being written off with the passing of Labor Day and buyers turning their focus away from middle meat steak items toward roasting cuts from the chuck and round. Normally the shift away from middle meats doesn’t last long as holiday buying demand starts to emerge in early October. 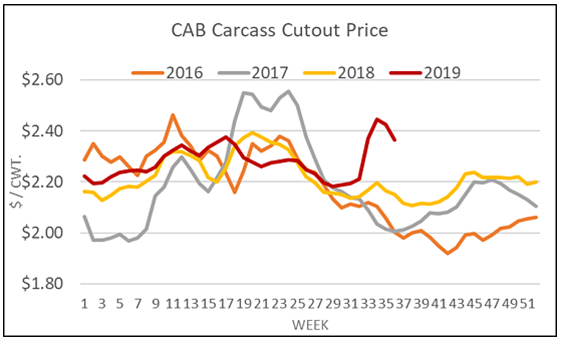 Undoubtedly, this September won’t come near setting annual cutout lows due to events that have transpired in the past 4 weeks. Instead, the current month’s beef prices will be near the top of the year, rather than the bottom.

Those looking to gain directional guidance from cutout values should recognize that there’s plenty of potential for lower prices in the near term before 4th quarter demand begins. It’s seemingly an “all bets are off” environment as adjustment continues to be a market theme with equilibrium an unknown target for a period of time. Normal seasonal subprimal price declines are potentially going to be larger in the coming weeks simply due to the lofty price point today. 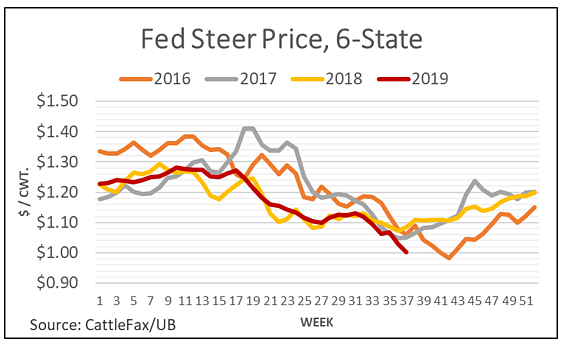 Historical September fed cattle price patterns are even more convincingly prone to weakness.  Each of the past three years posted their lowest monthly cattle price in the month of September. Had it not been for the major shift in leverage from feeders to packers in October 2015, that year would have also posted the annual fed cattle low in September.

The average recovery from the lowest fall price in each of the past 3 years has been 18%, with the 4th quarter highs coming during the second half of December. Interestingly, if one were only privy to the 2019 fed steer price chart and not the beef cutout chart for the same period, it would appear to be a fairly normal price pattern. That’s harder to sell with the corresponding cutout values in mind. Finding equilibrium very soon would benefit everyone on the production side of the business. Selling carcasses with more premium-value may be the highlight in the short term.

Two weeks ago we discussed an abnormally wide Choice-Select boxed beef price spread driven primarily by unexpectedly strong rib demand in the month of July. The Choice premium has remained very strong, at or above $20/cwt. for a period of 11 weeks now, according to Urner Barry data. That unseasonal July demand gave way to an “August to remember” from a boxed beef market standpoint, furthering the quality premium to Select. 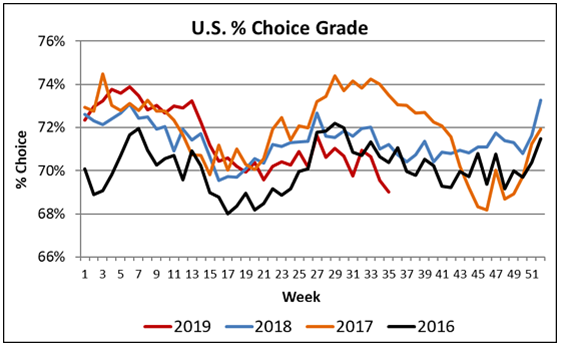 Most recent USDA data shows a deepening pattern of lower than expected Choice quality grade percentages begun to a smaller degree back in May. The latest Choice grade percentage is 69%, 6 points lower than the 74% seen a year ago. Through early July it was easy enough to explain away the dip in Choice carcasses by suggesting that the Prime grade had captured a few more carcasses. However, the year-on-year pattern shows the Select grade from July 1st to present is increased by 1.5 percentage points to average 19% for that period versus 17.5% last year. More cattle have graded Select this summer than last. CAB carcasses are currently qualifying at the rate of 32% of those eligible, just tenths of a decimal point below a year ago. That’s about 1 in 5 of all fed cattle qualifying for CAB. 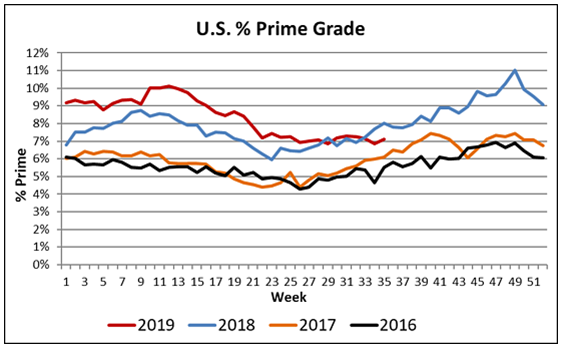 While this is a continuation of discussion from two weeks ago, it’s important for fed cattle marketers to know what is impacting grid pricing today. The Choice/Select spread will likely remain robust, ahead of holiday beef demand, only as long as supplies are reflective of this lower grade trend. The USDA grid premiums and discounts report (LM_CT169) lists values this week placing a 900 lb. CAB carcass at a $104/head advantage over the weighted average cash price.  Prime carcasses should be near a $245/head advantage.

Anticipating Market Slow-Down Ahead Of Holiday