Cattle market fundamentals are starting to have some impact to stabilize and move prices higher in a slow but steady fashion. The September 1st  Cattle on Feed report indicated placements during the month of August down 9% under a year ago and an “on feed” inventory 1% below a year ago. At the same time, feedlots marketed 2% fewer cattle this August than August 2018, but this figure was a direct result of the smaller harvest capacity, with the temporary loss of the Tyson plant in Holcomb, Kansas.

The fed steer and heifer trade saw some prices near $100/cwt. in the Southern Plains earlier in the week but by Friday there was $102/cwt. reported in Kansas and some Nebraska cattle brought as much as $103/cwt. A decent negotiated trade volume of over 80,000 head was nearly normal and signaled spot market demand on the part of packing firms. 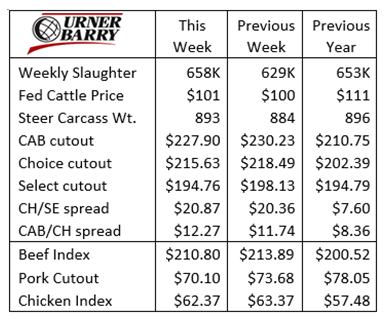 All of the above proved to be bullish to the general tone of the market on Monday of this week as CME futures prices moved higher. Contracts were mixed Tuesday and primarily higher Wednesday morning.

Last week’s federally inspected cattle harvest total of 658,000 head was a healthy follow-up from the smaller total seen during the prior Labor Day week. Indications are that finished cattle supplies are at a respectable level of currentness and we will likely move toward smaller harvest totals into the end of the year, in seasonal fashion.

Buyers have stepped back into the market at these prices led by good buying demand for ribs, which may have already seen the seasonal low at the close of summer with fourth quarter demand promised ahead. All cuts from the loin primal were firmly lower, with strips and top butts likely to cheapen further into fall. CAB tenderloins are approaching their seasonal low at $10.39/lb., wholesale, and will potentially increase to as much as $13.00/lb. at the 4th quarter price peak.

Chuck subprimals saw mixed price action last week with some items higher and some lower, balancing out to a net neutral price point for the week on the chuck primal. Round items were cheaper on the whole, with a bit of a price increase on gooseneck rounds and round eyes. Briskets are ever resilient in this the modern beef market, posting a current $3.05/lb. price versus $2.48/lb. a year ago.

PREMIUM BEEF WINS AGAIN
September marks the end of the fiscal year for Certified Angus Beef LLC, prompting us to tally the totals in several key metrics for the brand. Since beef is the food of celebration, it is only appropriate that several of our staff members and over 750 guests are gathered this week at the CAB Annual Conference in North Carolina. Companies committed to merchandising the brand as licensed partners through packing, wholesale, retail and foodservice sectors, along with several cattlemen, are being treated to awards, education and some of the best beef in the world.

The numbers won’t be final until September closes, but the “insider” forecast suggests a 3.9% total increase in sales tonnage for CAB in fiscal 2019. This makes 13 straight years of sales growth and a new record of 1.25 billion lbs. sold for the year, up 44 million lbs. over 2018.

It is the consumer demand for high-quality beef that generates the premium dollars filtering back to producers. The 2019 tonnage increase came mostly at the retail level with a 9% annual increase. The foodservice division was up 3.4%, while international sales increased just 1%. While the export increase is smaller, it’s still positive in a year when total U.S. beef exports have been smaller than a year ago.

Sales can’t happen without supply and it’s been a testament to the increase in cattle quality that the brand has grown even in years of drought-induced cow herd reduction. A run of increasing marbling through better genetics and management provided a pathway for what has become a 13-year catapult toward quality beef. This has allowed the CAB brand to more than double the portion of eligible carcasses accepted under the 10 carcass specifications from 2006 to 2019, resulting in the roughly 35% acceptance rate we’ll tally this year.

With the understanding that the beef business faces some uncertainty and consternation today, there is hope and solace in the fact that demand for high quality beef, backed by sound specifications, remains strong and growing.

KANSAS QUALITY GRADES DECLINE
Ironically, a recent development in the Kansas quality grade trend argues against the overarching decade-plus improvements described in the prior segment. We discussed the topic two weeks ago, but the latest USDA data is showing a sharp enough decline to warrant an update.

Fed steer and heifer marbling levels had already been depressed since early summer and we noted that grading had continued to decline into September. For the week of September 9th  the USDA pegs the Kansas fed cattle Choice grade at 65%, a 5.9 percentage point (ppt.) drop in one week, 9 ppt. below the same week a year ago. The decline was large enough to draw questions as to data accuracy, but a call to USDA confirmed the numbers. 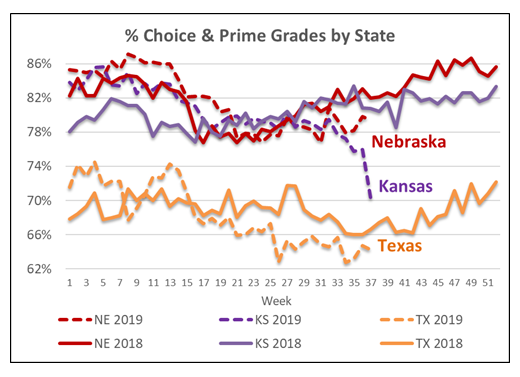 It’s difficult to assign a specific cause to this marbling dip which may right itself again at any time. In the meantime, cattle feeders positioned with a supply of high quality Angus genetics capable of significant rates of CAB and Prime carcass outcomes stand to add tremendous value to those pens through aggressive grid premiums for quality.

This Tuesday’s USDA Choice-Select price spread was $25.73/cwt. contrasted against an $8.13/cwt. average for the same week over the past 5 years. Further up the quality scale, the CAB cutout was $12.27/cwt. over Choice with the Prime cutout a whopping $68.55/cwt. over Choice. These spreads are not likely to contract soon given the unexpected Kansas Choice decline and the strong market signal setting low Choice as the baseline for quality. CAB, USDA Prime and CAB Prime products are the categories end-users are reaching for to solidify the reputation of their beef offerings.

Senate Passage of USMCA Likely Delayed Beyond This Week
2

Farm Succession Planning Gets A Boost From An Ethical Will
4