Last week’s fed cattle market now seems as dated as the May corn planting progress report, because the beef industry is coping with the fallout from the Tyson Fresh Meats fire at the Holcomb, Kansas, facility over the weekend. We must all take a step back and be thankful no lives were lost in the tragedy; recognize that economic losses, as much as they will sting, can be overcome.

While what happened has already been outlined in several media outlets, recent reports indicate that Tyson will quickly begin repairs to the facility to get it up and running. Staff members will be taken care of in the interim. If that’s a matter of several weeks instead of several months then all the better for everyone.

From a CAB production view, the temporary loss of one of our largest product sources is a concern and the marketplace will likely respond to the supply hit with some logical and some added emotional reaction. 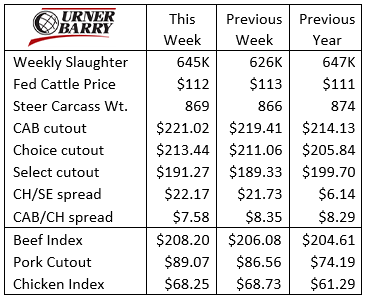 Live cattle futures were down the limit on Monday and down the expanded limit again on Tuesday. Loss of a plant, no matter how temporary, in a marketplace where harvest capacity is operating at close to the maximum creates a lot of fear and anxiety that cattle won’t get harvested at the proper pace and product availability will be affected. Both topics merit consideration, but how oversold will the futures become before a correction? Packers and feeders remained uncertain how to price cattle earlier this week.

On the end product side of the spectrum we’re looking at an already stronger boxed beef market last week with middle meats, particularly ribs, driving values. The plant shutdown will likely further exacerbate the increases generating larger packer margins. In turn, this incentivizes packers to pick up the extra cattle supply within the limits of tight labor constraints. Tyson has noted that they will do so at other facilities and other packers will likely do the same to the degree that they’re able. It’s important to keep in mind that end users have product orders placed that need to be filled ahead of Labor Day. Packing firms will be keen to take care of their customers and try to work the collective beef business through this unfortunate event.

In late June the only newsworthy trend in quality grades in the largest three packing states (TX, KS, NE) was that Texas packers suffered a rapid drop in the proportion of their carcasses grading Choice compared to 2018. At the same time Nebraska and Kansas packers held to the expected pattern with improved Choice and Prime quality grades into July. 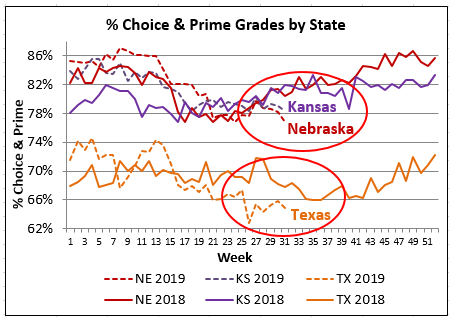 While we don’t know what head counts may have been involved, it’s likely that a decent share of cattle were harvested north of where they were fed this summer to help rebalance and shift supplies toward Nebraska plants beginning in June.

This could offer some explanation as to why the grading results from Texas came in much lower.

Now that we have the July data on the books we can see that Nebraska and Kansas marbling trends for the month followed right along with the Texas grade pattern from June. The four full weeks of July featured a fed cattle harvest count 54,000 head larger than the same period last year. This rapid throughput has created a very current fed cattle supply, regardless of the state, and quality grades are a reflection of that. 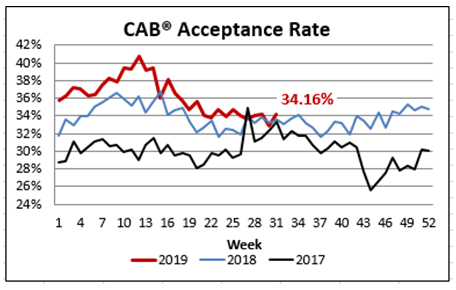 Carcass weights increased 4 and 5 lb. in the most recent data for steers and heifers, respectively. Steer weights are 6 lb. and heifer carcasses are 4 lb. below a year ago at this time, providing further proof of cattle supply currentness.

All of this suggests that even though we have larger cattle supplies the appetite of end users for Choice, CAB, Prime and CAB Prime product is not being easily satiated. The loss of production at the Tyson plant in Kansas will exacerbate the issue and expectations are for higher cutout values as a result. USDA reported yesterday’s Choice/Select spread at a tremendously inflated $25.78/cwt., compared to $6.58/cwt. a year ago this week and the 5-year average of $5.76/cwt. for the same period.

Our data pegs the latest CAB acceptance rate at 34.2% of eligible cattle for the week of July 29. The week prior saw a dip to 32.8%. June through July has otherwise not wavered below 33.6%, averaging 34% across both months. The steadier trend for percent CAB aligns with the Prime grade trend which, at 7.2% of fed cattle, is fractionally higher than a year ago for the week of July 29. Right now the grade decline rests entirely in the Choice category.

As we discuss the additive nature of carcass value in terms of the entire carcass it’s important to realize that the quality spreads (Choice/Select, CAB/Choice, etc.) are not equal across the primals and subprimals. The middle meats capture all of the glory as ribs, strips and tenderloins are the focus of the typically higher priced cuts. However, after the market assigns values to each of the subprimal cuts the contribution to total carcass value may be surprising. One of our objectives at CAB is to add value to the whole carcass, not just the middle meats. That has been achieved to the degree that CAB branded product carries a premium on many end meat subprimals where Choice and Select are priced the same.

Some may be surprised to learn that the CAB premium on a chuck primal contributes more to the total carcass value than does the CAB rib premium. On a price/cwt. basis it’s no contest, the CAB rib is $14.08/cwt. pricier than the Choice rib, whereas the CAB chuck carries just a $5.71/cwt. premium to Choice. The chuck is the heaviest of the carcass primals at 29.6% of total carcass weight while the rib is just 11.4% of the carcass.

The bottom line is that weight matters when it comes to total carcass value. The resulting total CAB premium above Choice from the CAB chuck so far in 2019 has been $15.21/head (assuming a 900 lb. carcass) versus the CAB rib premium contribution of $14.45/head.